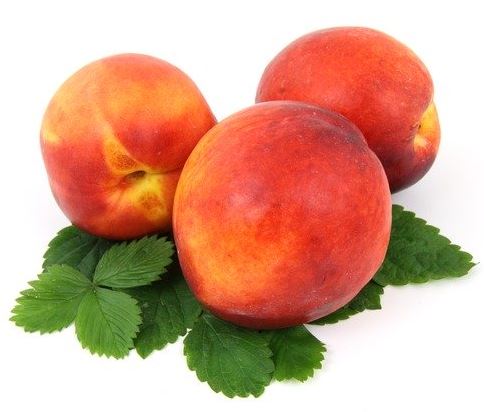 Nectarines are almost equal to peaches in the two areas: their genetic makeup and nutritional profile. The most obvious differences are their taste and skin. Peaches are covered with a few fuzzy fibers, while nectarines have thin, smooth skin. Nectarines have slightly firmer flesh and a more sweet-tart taste. Although their flavors & tastes are distinctive, nectarines and peaches may often be interchanged in recipes.

Nectarines are mostly available in the summer, together with the peak season occurring between July and August. Canned and frozen nectarines are available all through the year.

Antioxidants:
Nectarines are rich in anti-oxidant vitamins like Vitamin A, E and other flavonoid polyphenolic compounds like zeaxanthin, lutein, ß-cryptoxanthin, and other bioflavonoids like carotenoids. These compounds act as natural scavengers of the free reactive oxygen species and other free radicals that are responsible for many diseases including inflammatory diseases and even cancer.
High Blood Pressure:
Nectarines contain very high amounts of potassium. Potassium neutralizes the harmful effects of sodium and results in lowering the blood pressure. Potassium also assists in protein synthesis, muscle development, bone, and tissue health, and utilizes carbohydrates and aids in metabolic processes.
Cancer:
Nectarines contain the natural compound called chlorogenic acid. This compound has several health benefits, including the prevention of tumors and inhibition of oral, colon and lung cancer. This compound inhibits the proliferation of cancer cells. Moreover, beta carotene in the fruit also shows anti-cancer effects.

A nectarine (botanical name P. persica var. nucipersica) is a stone fruit that is often confused with the peach. It is linked to apricot, almond, plum, and cherry, which stems from the genus Prunus too. The nectarine tree can resemble a cherry tree and grows in areas with a cold winter period.

Nectarine is a cherry variety and could be yellowish or white. What makes nectarine distinct from peach is its smooth, shiny skin. This sweet, yummy fruit is a must-have in the summer. The nectarine is also a superb fruit for both beauty and health.

Nectarines are available throughout the summer, which makes them a fantastic addition to refreshing beverages and desserts. In 2003, China was the dominant peach and nectarine manufacturer, accounting for 38 percent of its worldwide production. When used in cooking, it is going to delight your taste buds and refresh your senses.

Nectarines are believed to have been cultivated around 4,000 years back. Like peaches, nectarines have been used in traditional home remedies for stomach aches and in traditional Chinese medicine (TCM) to treat digestive issues such as constipation and menstrual pain.

The nectarine was known since the early Roman and Greek times. Like the peach, it’s supposed to be native to China; Alexander the Great is thought to have brought it to Europe. The nectarine, a unique, smooth selection, was cited in French and English documents in the sixteenth century, as a mutation that eliminated the velvet in the peach’s fruit.

France still creates many nectarines today, but China is the major supplier. The world production in 2019 of nectarines and peaches was estimated to be 19.9 million tons, with China continued to be the world’s leader at 13.5 million tons.

Nectarine has a high water content of 88%. In addition to being sterile, the nectarine is a diuretic. It ensures that radicals are evacuated from the body. Additionally, it demonstrates laxative properties. Indeed, nectarine comprises fiber, which speeds and modulates intestinal transit.

For internal use, the nectarine is recommended in the event of constipation.

Nectarine has high levels of antioxidants. These protect our bodies from cell aging and certain cancers.

Moreover, it unites on protecting the body and stimulates the immune system.

Besides being low in calories and rich In fiber, nectarines are a fantastic source of vitamin A, vitamin C, and potassium. These nutrients provide significant health benefits in terms of enhanced digestion, metabolism, and heart health.

The USDA provides this nutritional breakup information for a nectarine serving size of 100 grams.

One medium nectarine has about14 grams of carbs, which makes it appropriate for many low-carb diets. However, fruits of all kinds are prohibited during the induction phase of the Atkins Diet or the South Beach Diet’s first stage. This is because the daily carb intake could be restricted to no more than 22 grams.

A number of the carbohydrates in nectarines come from simple carbohydrates, namely sugar. In nectarines, fructose accounts for at least a third of the simple sugars; the remainder consists of glucose and sucrose. Rather than complex carbs that are slowly broken down into simple sugars, simple carbs are burned fast and have the potential to influence your blood glucose.

Nectarines have a modest glycemic index (GI) of 43 despite the sugar content. This value describes how much the food affects blood glucose on a scale of 0 (low) to 100 (high). Anything below 55 is considered to be on the low side.

If you have diabetes or prediabetes, you can have nectarines in moderation as part of a diabetes-friendly diet. It will give a zing to the taste buds and those with a sweet tooth. Nectarines also deliver 2.2 g of fiber per serving, about 8 percent of the 25 g that women need each day, and 6% of the 38 g that men require daily.

Nectarines are a low-carb food with no cholesterol and less than a half gram of fat per serving. This fat is comprised of monounsaturated and polyunsaturated fats that are good for the heart.

Nectarines also offer a healthy dose of the antioxidants beta-carotene,  and tryptophan. In comparison to peaches, nectarines have more plant-based polyphenols, which naturopaths consider have different medicinal properties.

Beyond their nutrient value, nectarines are believed to provide health benefits either by preventing or reducing the risk of obesity, diabetes, and cardiovascular disease.

According to a 2007 Research from Texas A&M University, nectarines contain potent polyphenol compounds that may reverse symptoms of metabolic syndrome while concurrently lowering blood glucose and reducing vascular inflammation related to atherosclerosis (hardening of the arteries).

According to a research study done by Texas AgriLife, peaches, plums, and nectarines have anti-inflammatory compounds that may potentially counter diabetes due to obesity and cardiovascular disease.

The research showed that the chemicals in stone fruits might be a weapon against metabolic syndrome, in which inflammation and obesity cause serious health difficulties.

This study has proven that stone fruits such as peaches, plums, and nectarines, have anti-inflammatory compounds that may fight the syndrome. Studies indicate that phenolic compounds present in these fruits have anti-obesity, anti-inflammatory, and anti-diabetic properties in various cell lines and could also lower the oxidation of bad cholesterol LDL that’s related to cardiovascular disease.

The study suggests that four polyphenolic groups such as anthocyanins, chlorogenic acids, quercetin derivatives, and catechins, behave on various cell lines, such as fat cells, endothelial cells in blood vessels, and macrophage cells that take part in the inflammatory reaction.

The polyphenol compounds working together are considered to moderate blood glucose levels, decrease the risk of heart disease, and prevent the accumulation of adipose cells around organs.

The same group of researchers in a 2009 study reported, the exact polyphenols decreased the estrogen-independent proliferation of breast cancer cells by 50 percent (in test tubes). This implies that peach and nectarine polyphenols may provide a protective advantage against some types of breast cancers.

These antioxidant chemicals (Vitamin A, vitamin C, beta-carotene, and tryptophan) not only help lower vascular inflammation, improve circulation, and blood pressure but can also stop the oxidation of low-density lipoprotein (LDL) cholesterol, the kind associated with atherosclerosis and coronary artery disease.

Despite these potential advantages, there have few human studies investigating the direct dietary effect of nectarines on these medical conditions.

Are organic nectarines better than non-organic ones?

Nectarines are on the “dirty dozen” list, just like peaches. This is the list of fruits that have higher pesticide residue. When possible, it’s ideal to purchase organic nectarines. Beyond security, organic fruits are usually permitted to ripen longer on the tree or vine, boosting their sugar concentration.

Non-organic nectarines are fine if you are on a budget. Frozen nectarines may be used for recipes and generally maintain the majority of their nutritional value. If buying canned nectarines, make sure to choose the ones that are packed in their own juices and don’t have any added sugar.

Can you pit a clingstone nectarine?

Clingstone nectarines have a large stone in the center that’s tough to remove. To extract the pit or stone easily, wash the nectarine and dry it with a paper towel. Making a deep cut across the middle seam of the fruit and continuing all over the stone. Then twist the cut nectarine in opposite directions, so you have two halves.

You can dice them finely and combine them with lime juice, diced red onion, cilantro, and sweet chili sauce for a yummy fruity salsa. That is also pureed for smoothies or cooked and simmer for an unsweetened dessert topping.

Can you find out if a nectarine is ripe?

Smell the nectarines when you buy – like you would smell a wine. Choose the ones that have a tangy smell and are free of blemishes, dark spots, soft spots, and wrinkles. The outer skin should be creamy to an orange-yellow.

Nectarines picked at their prime will last to ripen at room temperature. You can accelerate the process by placing them in a paper bag. The hormone ethylene will be emitted as the fruit ripens and behaves as a ripening agent when restricted to a small container.

Allergies and side effects

A true allergy to nectarine isn’t as common as to other foods. With that said, cross-reactive symptoms can develop soon after ingestion nectarines because of a phenomenon called oral allergy syndrome (OAS). This is when the immune system makes a mistake and thinks certain foods are pollens that may cause allergies. Pollens that are commonly associated with nectarine OAS are birch pollen and grass pollen.