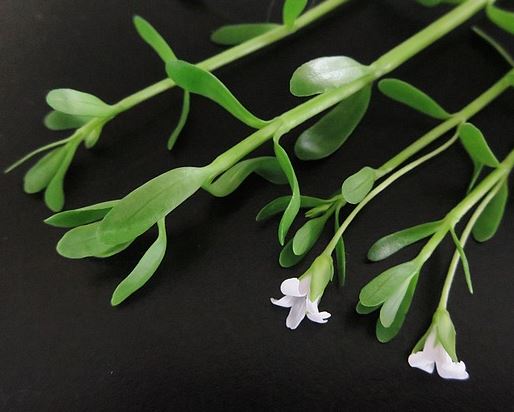 Brahmi is a creepy perennial non-aromatic herb. The leaves are oblong, succulent, and about 4-6 mm thick. Leaves are oblanceolate. The flowers are small, actinomorphic, and white. It’s an aquarium plant. It is named after one of the most significant states of consciousness (Brahman or God-consciousness), Brahmi (Centella Asiatica or Gotu Kola) is among the most effective brain tonics from the Ayurvedic apothecary. The leaf of this plant looks like the cerebellum and is used in Ayurveda to promote intelligence, memory and to calm the nervous system.

If you’re contemplating trying Bacopa, be sure you ask your primary care provider first to weigh the advantages and disadvantages and discuss whether it is suitable for you. It shouldn’t be confused with Gotu kola, an herb that also goes by the title of Brahmi. Brahmi calms emotional turbulence, supports restful sleep, and simultaneously improves concentration and endurance. Brahmi is referred to as a brain tonic and can work on the mind due to the gut microbiology. Recent research suggests that Brahmi supports healthy skin, lymph, and circulatory functions. While Brahmi was suggested in support of numerous neurological and brain health mechanisms, it appears to stand out as support for memory, focus, clarity, mood, learning, and healthy cognitive function.

The most well-studied components of Brahmi for the brain are called bacosides (a chemical compound that belongs to the triterpenoid saponin group). Bacosides are shown to be neurotransmitter-stimulating, neuroprotective, brain antioxidants that boost cerebral blood circulation.  Preliminary evidence indicates that Bacopa may have antioxidant properties. The herb contains saponin compounds such as bacosides and bacopasides, which might improve the communication of brain chemicals involved in cognition, learning, and memory, and also inhibit inflammation in the brain.

The primary compounds of Brahmi are dammarane-type triterpenoid saponin with jujubogenin, alkaloids brahmine, herpestine. A majority of brain tonic agents stimulate and sometimes deplete brain neurons. It has been shown that Bacopa can nourish the nervous system and boost brain function, learning, memory, and neuroprotection. Bacopa was used in combination with Centella in early times to help boost memory. Contemporary science can help clarify why these two herbs might be better together than apart.

Brahmi has been used to explain two different Ayurvedic herbs–Centella Asiatica and Bacopa monnieri. Brahmi in Sanskrit refers to the female essence of universal consciousness in addition to the creative potential that emerges from pure consciousness. Both of the herbs which bear the title Brahmi are considered to promote subtle comprehension and sattva (the pure essence of consciousness). They’re also both highly admired for their mind-enhancing properties and their support of the nervous system as a whole.   Gotu kola and Bacopa tend to pacify Vata, pitta, and Kapha doshas. However, if taken in excess, both can increase Vata.  Both herbs help the nervous tissue, lymph, blood,  and urinary tract, in addition to the circulatory, digestive, and nervous systems.

– Brahmi for the mind: Both kinds of Brahmi are proven to rejuvenate the brain, improve memory, improve endurance, and also to directly influence the quality of awareness. Both are considered sattvic herbs (promoting subtle consciousness ). Since Ayurveda illuminates an intimate link between the heart and the mind, both kinds of Brahmi must be called heart tonics. While Bacopa is usually favored for Vata aggravations and mental disability due to stress and fatigue, Gotu kola is favored in psychological or psychological exacerbations involving both Vata and pitta. The two bacopas and Gotu kola work quite straight to enhance the quality intellect and intelligence as tonics for the brain.

– Heals cognitive disorders: Among the most prized advantages of Brahmi is its ability to stimulate the brain, especially concerning memory and concentration. It has been used in Ayurvedic medicine to improve attention and increase retention. Some of these organic compounds in Brahmi stimulate cognitive pathways in the brain to boost cognitive capability. It has the ability to decrease the onset of cognitive disorders as we get older, such as dementia and Alzheimer’s disease. Research has indicated that the presence of the amyloid chemical in neurons is responsible for brain damage. The bio-chemical bacosides compound in Brahmi effectively stimulates the creation of new neural pathways. It lowers the oxidative pressure from the mind, which keeps our heads sharp well into our old age.

– Respiratory benefits: When Brahmi is brewed in a tea or chewed as ordinary leaves, it can seriously enhance your respiratory health. It’s been used in Ayurvedic treatments for bronchitis, congestion, chest colds, and blocked sinuses. It may clear out excess phlegm and mucus and relieve the inflammation in the throat and respiratory tracts to offer you rapid relief.

– May heal chronic pain: Chronic pain is a massive health issue, and health cost around the world today.

A review published in Current Medicinal Chemistry revealed that Bacopa monnieri not only has strong antidepressant effects, but it’s pain-reducing capabilities comparable to morphine. The analysis also suggested that this herbal remedy provides protective advantages for organs commonly affected by opiate toxicity such as the brain, heart, and kidneys. Researchers reasoned that Bacopa is may be a safe and well-tolerated herbal treatment for pain control in several clinical trials, including various age classes.

– Reduces blood glucose: Brahmi is effective and well known for regulating the blood glucose levels in patients with diabetes and can help improve symptoms of hypoglycemia.

– Boost immunity: Once consumed in any form, tea, leaves, or otherwise, Brahmi can boost the immune system. The small quantity of nourishment is supplemented with the antioxidant chemicals to improve the reaction time of our immune system against germs, viruses, or bacterial disease.

– Epilepsy Treatment: Seizures occur in the body as soon as your brain cells, which communicate through electrical signals, send out the wrong messages. Typically, many seizures are needed before there’s a diagnosis of epilepsy. While few human studies have been done, there’s plenty of study in animals that indicate Bacopa might be a pure epilepsy treatment. These research studies find that therapy with Bacopa modulates gene expression, helps fix the faulty reception of brain cells, and helps increase GABA responses. All these results are a great indication that the cognitive impairment and seizure action brought on by epilepsy could potentially be alleviated with Bacopa.

Brahmi can be a terrific remedy that offers relief from arthritis, gout, and other inflammatory conditions. Additionally, it helps in soothing gastrointestinal ulcers and healing an irritable bowel syndrome.

– Brahmi for the Skin

Bacopa is very soothing to the scalp and skin. Both of them are considered very beneficial in clearing aggravations of their epidermis, though Bacopa is preferred when an underlying nervous imbalance is involved, and Gotu kola is more effective with signs of increased pitta. Both are also utilized to encourage healthy hair growth. Implementing either herb to the scalp has the extra benefit of proximity to the brain and central nervous system, in which the herbs are well-positioned to inspire lots of the advantages mentioned above.

How do you use Brahmi?

Oil: Brahmi Petroleum made with Bacopa may be placed on the outside of the body to promote healthy skin, excellent recovery, and freedom of movement at the joints. It might also be massaged into the scalp to encourage healthy hair growth and to promote any of the numerous benefits Brahmi offers the mind, the nervous system, and the brain.

– Internal use of Brahmi: Because flavor plays such an essential role in the digestive process and signals the body to initiate its supportive mechanisms, Ayurveda traditionally urges tasting herbs. Brahmi may be taken internally as a pill, powder, or as a liquid extract.

– Herbal Powders: Bacopa powder gives the experience of tasting the herbs and provide the most economical alternative for buying either kind of Brahmi. These herbs can be taken in ghee since it can help to direct them toward the brain and the nervous system. Another popular carrier for Brahmi is milk since it enriches the cooling properties of the herbs.

– Dosage: Small doses of Brahmi as prescribed by Ayurvedic practitioners aren’t correlated with any known side effects.  It has been used safely in Ayurvedic medicine for centuries.

Precautions: Long-term use of any herbal supplement is generally discouraged, and Brahmi is no exception. Normal usage for over 12 weeks is discouraged, so it should only be used if you want it to alleviate a particular symptom or illness. Also, because of its effects on the respiratory system, urinary tract system, cardiovascular disease, and blood glucose levels, you should consult a doctor if you suffer from asthma, urinary tract infections, a diminished heart speed or hyperglycemia. Apart from these concerns, this herb is not considered to be a naturally-occurring food.

There is a difference between Brahmi and Bacopa. Brahmi is a name used for two very important but different Ayurvedic herbs used for improving and caring for brain function. The species Bacopa monnieri is named Brahmi in South India, and Centella Asiatica is named Brahmi (also known as Gotu Kola) in northern India, where it commonly grows. These herbs can work together to enhance brain function and maintain the central nervous system (CNS) healthy. Brahmi oil has refreshing effects on the brain, used as a psychological tonic, which helps in focused concentration, increasing memory ability, mental alertness, amnesia, and Alzheimer’s. Brahmi has nitric oxide, which has positive impacts on brain function and mental clarity.