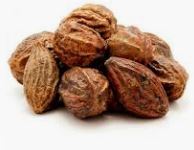 Haritaki is one of the three rejuvenating herbs which constitute the amazing Triphala formula. Also called “chebulic myrobalan”, it’s the dried fruit of this Haritaki tree which goes by the botanical name Terminalia chebula and is oblong in shape. It is native to India but also grows all over in South Asia (China, Nepal, and Srilanka). Haritaki is generally utilized in the powdered form and has a different brownish-black color . Depending on the habitat and contour there are seven types of haritaki available in India mainly, Jayanti Haritaki, Abhaya Haritaki, Amrita Haritaki, Putna Haritaki, Rohini Haritaki, Vijaya Haritaki, Chetaki Haritaki. Haritaki characterizes all five flavors mainly Katu (i.e. pungent), Tikta (i.e. sour ), Kashaya (astringent), Madhur (sweet) and Amla (sour). It’s Laghu and Rukhsha Guna (i.e. mild and dry land ), Tikshna Virya (hot potency) and Madhura Vipaka (sweet after digestion).

It was known as the “king of herbs” by ayurvedic healers, this miraculous fruit holds great importance in the holistic healing of Ayurveda and is broadly used for treating various ailments because of its laxative, astringent, purgative, anti-bilious and anti-oxidant nature. Offered in powder or dietary supplement form, haritaki has a sour flavor. It’s full of vitamin C and chemicals found to have antioxidant and anti-inflammatory consequences.

People today use haritaki to promote recovery from a range of conditions which range from sore throat and allergies to constipation and indigestion. In Ayurveda, haritaki is thought to encourage the “Vata” dosha.

Haritaki is a tree commonly found throughout southern Asia and India. The dried fruit of this Terminalia chebula tree has been used in many Ayurvedic practices for thousands of years. It is often referred to as chebulic myrobalan and is available in both powder and dietary supplements. People today use haritaki fruit and powder for treating many types of health conditions, from sore throat to allergies to indigestion. According to Ayurveda, haritaki is known to support the Vata dosha and help balance the constituents of the body. Let us check out some of the major health benefits of haritaki powder.

A study was done in 2010 and published in the journal Oral Health, and Preventive Dentistry found that using a haritaki-based mouthwash can significantly help in preventing cavities.[1] In the study, 20 participants were provided with a mouthwash made with haritaki or with distilled water. The research team looked at the saliva samples collected from the participants after rinsing and discovered that the people using haritaki-based mouthwash had a significantly less amount of cavity-causing bacteria in their mouth as compared to those who only rinsed their mouth with distilled water.

Diabetes has today become a rampant epidemic all around the world. Diabetics are relatively at a higher risk of suffering from a heart attack and other chronic diseases. Diabetes can lead to hypertension, kidney failure, and even lead to the amputation of limbs if diabetes-induced problems continue to progress without being managed properly. [2] [3] [4]

For centuries now, haritaki has been used in India and other countries to decrease the fluctuations in blood sugar levels and for regulating the various systems of the body.

A study done on animals in 2010 found that haritaki powder may help treat diabetes by reducing the levels of blood sugar.[5] The study, published in Phytotherapy Research journal, focused on running experiments on rats with metabolic syndrome. While the research is limited to animal studies only, but one can nevertheless get an inkling that haritaki may also be beneficial in treating diabetes in humans.

The haritaki fruit is also known to improve the body’s ability to process glucose better, thus decreasing the risk of developing diabetes.

Haritaki powder may also act as a natural pain reliever. A smalls study published in 2016 in the Journal of Anesthesiology Clinical Pharmacology found that haritaki may help people with managing chronic pain.[6]

The research team administered the participants with a single oral dose of haritaki, and some were given a placebo. The study found that the participants who were given haritaki had an increased pain threshold and pain tolerance as compared to the people who received the placebo.

Many other studies have also proven that haritaki powder or the extract of haritaki fruit helps in pain management.

One of the research study published in 2019 in the Journal of Medicinal Food had done a 90-day randomized study that included 105 participants with chronic knee pain. [7] The study was placebo-controlled and a double-blind study. The participants who were given the extract of haritaki fruit experienced the following results at the end of 90 days:

● They had increased physical function

● All of them reported experiencing an improved quality of life

A lot of evidence is there to support haritaki’s role in boosting cognitive functioning. The haritaki fruit is known to increase brain functions, including boosting both the short term and long term memory and enhancing learning retention.

Haritaki’s effects on cognitive functioning are believed to be due to the fact that oxygenation properties of the body get significantly enhanced when you take haritaki. This increased oxygenation helps open up many neuro-pathways in the brain to improve the overall functioning of the brain. Many medical studies have successfully proven that haritaki helps improve the brain function of the test subjects.[8]

Additionally, the potent antioxidants and flavonoids present in haritaki are known to enhance the memory capacity, focus, calmness, alertness, and concentration of a person. It is known as an effective brain tonic and stimulator. People who are regularly taking haritaki in some form have been found to experience a delay in the progression of neurodegenerative disorders such as dementia, Alzheimer’s disease, and Parkinson’s disease. [9]

At the same time, haritaki acts as a memory-boosting aid that enhances a person’s reasoning and problem-solving capabilities, and also boost other cognitive abilities. The neuroprotective properties of this plant not only prevent loss of memory but also relieves tension from the mind.

Haritaki powder has been used as a traditional remedy for improving digestion and gut health for hundreds of years now. In Ayurveda, it is used for treating a variety of gastrointestinal disorders like heartburn, diarrhea, flatulence, gastroesophageal reflux disease (GERD), indigestion, constipation, stomach pain, and peptic ulcers.

The haritaki fruit is known for its carminative properties that help break down the food particles as they reach the stomach and the intestines. It also boosts the secretion of the digestive juices in the stomach, thus increasing the absorption of the essential nutrients in the intestines. Haritaki powder also reduces abdominal distension, bloating, and cramps caused by gas.

Haritaki powder is also well-known for acting as a mild laxative, which helps treat constipation naturally and also cleanses the intestines, assisting in the elimination of waste products from the body. [10]

The effects of long-term use of haritaki are not known. However, because haritaki may decrease glucose levels, there is some concern that using it in conjunction with blood-sugar-lowering drugs may have harmful consequences.

You should consult with your physician or health care team prior to using haritaki in conjunction with blood-sugar-lowering drugs (like diabetes medications). Haritaki shouldn’t be used by pregnant women, nursing mothers, children, people who have medical conditions, or individuals that are taking drugs without consulting with a physician.

Even though there is a lack of clinical trials that support the health claims of haritaki powder, there is an ample amount of anecdotal and Ayurvedic evidence to support that haritaki definitely boosts your health and also helps in healing several conditions. Nevertheless, there is still a lot of evidence from animal studies, laboratory studies, and test-tube studies that support haritaki’s health benefits. However, preliminary research based on human reviews is few, but the ones that have been done do suggest that haritaki might offer some health benefits. It is always important, though, to consult your doctor or an Ayurvedic practitioner about whether or not you can have haritaki, especially if you already have a current underlying health problem.