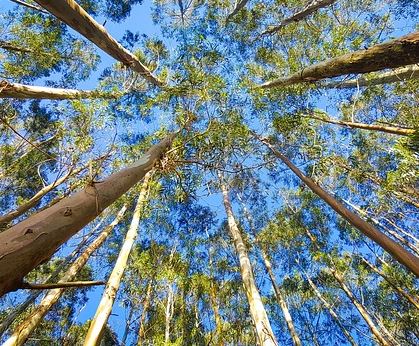 Eucalyptus is a genus or group of over 700 different species of flowering trees and shrubs which belong to the family Myrtaceae. Most of the species are native to Australia, but every other territory in the world may possess a representative species of their own. Eucalyptus oil is made from the steam distillation of leaves of the Eucalyptus tree. Eucalyptus oil has many potent qualities, which are antiseptic, antimicrobial, anti-inflammatory, and analgesic. It is also used for its deodorizing properties in many pharmaceutical products such as cough syrups, toothpaste. Eucalyptus globulus (botanical name) is the main source of Eucalyptus oil worldwide. Let us have a look at the significant benefits of Eucalyptus oil.

Eucalyptus oil has many benefits:

1. Eucalyptus oil as a natural pesticide

Globally, damage to storage crops by an infestation of pests accounts for up to 10-40 %. Fumigation of insecticides is the primary strategy in the management of pests. But these pesticides have other harmful effects on the crops. Hence, there is a need to develop bio-insecticides, which include essential oils like Eucalyptus oil, which have potent insecticide activity. It is also demonstrated that the burning of Eucalyptus leaves provides a cost-effective method for prevention against mosquitoes and flies. Eucalyptus based products could provide potent protection against mosquito and other insect bites. [1] [2] [3] [4]

The major constituents of Eucalyptus oils are proven lethal against a broad spectrum of microbes, including bacteria and fungi, both of which are soil-borne and post-harvest organisms. It is found that the active constituents of the Eucalyptus oil are responsible for the reduction of mycelial growth and also inhibit spore formation and germination. It was demonstrated that lemon-scented eucalyptus oil resulted in controlling the apple gray mold by 70%. During an experiment, Eucalyptus globulus oil was screened against various strains of bacteria, which include Streptococcus pyogenes, Streptococcus pneumonia, Staphylococcus aureus, Haemophilus influenza, Klebsiella pneumonia. The study concluded that Eucalyptus oil could be used for the control of respiratory tract bacteria. [5]

In research carried out by the University of Montenegro, the MIC (Minimum Inhibitory Concentration) and the MBC (Minimum Bactericidal Concentration) of Eucalyptus oil were tested using agar disc diffusion method. The study concluded that the MIC and MBC levels were as low as 0.9 mg/ml for various bacteria such as E. coli, S. aureus, S. pyogenes, etc. while for some bacteria such as K. pneumonia was as high as 6.25 mg/ml. [6]

The active constituents present in Eucalyptus oil have also show phytotoxicity against weeds and have excellent potential for weed management. This could be a great initiative to reduce pollution, which is caused by the burning of stubble with the natural use of Eucalyptus oil. In an experiment, essential oil from Eucalyptus tereticornis and Eucalyptus citriodora in vapor form exhibited significant toxicity to noxious weed Parthenium hysterophorus. However, the study could not evaluate the impact of toxicity on associated plants and non-target organisms. [7]

In another study which was carried out between several crops and weeds, it was found that Eucalyptus oil exhibited species-specific toxicity. The toxic effects were more on small-seeded crops compared to large-seeded crops.

Further, the toxicity was found to be more in Dicot weeds rather than monocot leaves. These studies suggested that Eucalyptus oil could be incorporated as an essential constituent in the preparation of Bioherbicide for Weed Management. Yet, much needs to be done as far as commercialization of this oil is concerned. [8] [9]

Traditionally in many parts of the country, hot water extracts of leaves of Eucalyptus were used as an analgesic, anti-inflammatory, and antipyretic remedies for the treatment of respiratory infections such as cold & flu. In a study, the analgesic and anti-inflammatory activity of Eucalyptus oil were tested in Wistar rats and Albino mice.

The analgesic activity was tested using the following methods:

The anti-inflammatory activity was tested using the following ways:

2. Neutrophil migration into the peritoneal cavity in rats

The study concluded that the lethal dose (LD50) for Eucalyptus oil species ranged from 240 ± 34 mg/kg to 353 ± 64 mg/kg, respectively, in mice. Hence, the treatment dosages, which were used in the study, ranged from 10-100 mg/kg, which were far below the LD50 dose. The study proved to show significant analgesic and anti-inflammatory effects of Eucalyptus oil. It was observed that the oil contained both peripheral and central anti-nociceptive activity.

The study suggested that the essential oils from Eucalyptus result in varied peripheral and central analgesic effects depending upon the Eucalyptus species. The mechanism for the analgesic activity was proposed that the oils were involved in the prevention of sensitization of nociceptors, which are responsible for pain signaling. It is also believed that the active constituents of the oil participate in the Arachidonic acid pathway resulting in the inhibition of the production of prostaglandins. However, the exact anti-inflammatory mechanism of the Eucalyptus oils is still not precise, but, other researchers suggest that oils of Eucalyptus result in inhibition of inhibitory mediators such as cytokines, leukotrienes, etc. [10] [11] [12]

Some essential oils can be poisonous, but those that are available commercially, from reliable sources, are generally safe to use. It is important to use “pure, authentic, and real essential oils.” Eucalyptus products can be used safely on skin, provided that the oil is diluted with a carrier oil, such as olive oil. Eucalyptus can create irritation and a burning sensation. It shouldn’t be used too near the eyes. It’s necessary to do an allergy test before using Eucalyptus since it’s highly allergenic.

Allergies can develop over time. In case you have used lavender oil before and now appear to be having an allergic reaction to it, discontinue use. Side effects may include diarrhea, vomiting, nausea.

It’s not safe to take eucalyptus oil because it’s poisonous. In some people with asthma, Eucalyptus can make their condition worse. Other people find it helps to alleviate their asthma symptoms.

Severe allergic reactions can occur when eucalyptus oil is taken orally, such as abdominal pain, problems with coordination, low blood pressure, and shortness of breath.

Signs of eucalyptus poisoning include nausea, feelings of suffocation, and smaller pupils. It’s important to remember that chamomile may interact with other medicines and can affect the liver. Children are more sensitive to essential oils, so care must be taken when using Eucalyptus with kids. They are best avoided during pregnancy. This list does not include all possible side effects, and others might occur. Check with your doctor for additional information regarding side effects.

From the points listed above, it is clear that Eucalyptus oils possess a wide variety of benefits. The benefits can be summarized as an insecticide, anti-inflammatory, analgesic, antimicrobial, etc. Eucalyptus oil inhalation is beneficial for the treatment of respiratory tract infections caused by potential microorganisms. Eucalyptus oil is also helpful in soothing the pain in joints caused due to inflammation. Eucalyptus oils can be used to prevent mosquito and insect bites. It is a potential oil that could be used in the future for insecticide-free weed management. There are still many control tests and parameters which are required for the standardization of such traditional substances so that they could be quickly commercialized.