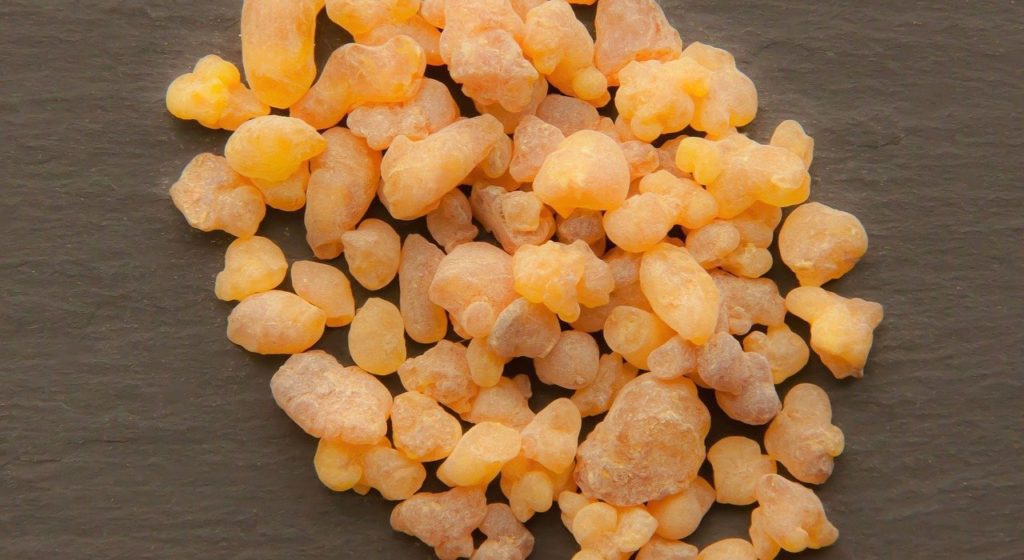 What is Boswellia serrata?

The herb Boswellia serrata, also known as Indian Frankincense or Salai guggul, has been used in India for centuries to deal with inflammatory conditions like osteoarthritis and asthma. Boswellia extract comprises beneficial compounds called Boswellic acids that fight inflammation and reduce oxidative stress. Boswellia serrata oil is well known for its anti-inflammatory capabilities. Boswellia is a moderate to large branching tree found in the dry hilly areas of India. When the tree trunk is tapped, a gummy oleoresin is exuded. A purified extract of this resin is used in modern herbal preparations.

The resin of this Boswellia serrata tree is a common and important herb in Ayurvedic medicine. Also called Indian Frankincense, Boswellia has traditionally been used to encourage occasional pain and promote a healthy inflammatory reaction.

Scientific research is beginning to encourage the advantages of Boswellia, but most studies to date have used cell or animal models. Scientists don’t know the effects of the substance on people, so many more clinical trials with people are essential before doctors can recommend this therapy. Here are some health benefits and risks of Boswellia.

Ayurvedic use of Boswellia

Natural health practices such as Ayurveda have utilized Boswellia for centuries to treat various chronic inflammatory disorders. The scientific study on Boswellia is not as developed, but it’s starting to unveil possible uses for the resin and its extracts.

Traditionally, Boswellia was used to treat inflammation. Recent research has confirmed the effectiveness of using it to treat inflammatory conditions, such as arthritis, osteoarthritis, rheumatoid arthritis, and ulcerative colitis. Boswellia seems to be safer compared to other standard therapies for osteoarthritis and other inflammatory conditions, which have a higher potential risk for side effects, such as gastrointestinal bleeding.

– Boswellia and the Doshas

Concerning the doshas, Boswellia conveys the astringent, bitter, and sweet tastes. It pacifies Pitta most, and also can reduce Kapha dosha. In large doses, Boswellia may mildly aggravate Vata.

The next sections discuss the evidence behind its possible benefits for inflammatory health ailments. Here’s why choosing a Boswellia supplement is a superb idea to calm the inflammatory reaction.

What is boswellia serrata good for?

Boswellia may help with many conditions caused by inflammation:

–  Inflammatory bowel disease symptoms: The anti-inflammatory effects of Boswellia may also benefit those who have inflammatory bowel diseases (IBD), such as ulcerative colitis and Crohn’s disease. A study in the World Journal of Gastroenterology looked at the action of these chemicals. In animal models, Boswellic acids improved markers of IBD without causing adverse impacts on the surrounding organs. They may, therefore, prove to be a useful supportive treatment for these chronic conditions. Research in people will have to back up these findings before specialists can make any recommendations.

– Cancer Care: A recent study in the journal Oncotarget also revealed that the essential oil from Boswellia diminished aggressive skin cancer cells without harming healthy skin cells. However, the researchers used cells and animal models. While these early results look promising, more research in people must expand on how Boswellia may help with cancer treatment.

One of the most important uses of Boswellia is for joint pain and stiffness, symptoms frequently experienced by people with osteoarthritis of the knee, hip, and hand. In comparison with the placebo group, participants taking Boswellia experienced a substantial improvement in physical function. Their stiffness and pain were reduced. Medical imaging of the patients’ knees showed improvements in people’s knee joints taking the Boswellia supplement.

– Inflammation: Curcumin is a part of the herb turmeric and plays a significant role in the spice’s healthful properties. In one randomized, double-blind research, 201 patients with osteoarthritis were given either Boswellia and curcumin or a placebo three times per day for 12 weeks. Those given the Boswellia and curcumin mix experienced significantly improved physical performance and reduced joint pain.

– Rheumatoid arthritis: Inflammation around the joints is the primary cause of rheumatoid arthritis (RA) symptoms. Many treatments for RA, including nonsteroidal anti-inflammatory medications (NSAIDs) and steroids, concentrate on reducing inflammation. Boswellia is apparently effective in reducing inflammation, so it might also decrease the symptoms of RA. The Arthritis Foundation urges boswellic acid capsules as a possible therapy for RA, in addition to osteoarthritis. In an animal study, the anti-inflammatory impact of Boswellia was less important than that of a typical prescription medication called indomethacin. However, the researchers noted that the infusion might be useful as a complementary treatment to support traditional RA therapy.

Thus, boswellic acid seems to block off the allergic reaction, leading to an asthma response in the first location.

In the long run, this may make Boswellia a useful complementary treatment for asthma. For now, researchers will need to concentrate on working toward research in humans.

How to take Boswellia

Boswellia comes in a few different forms, and the quality can vary widely. The Arthritis Foundation advocates taking approximately 300-400 milligrams (mg) of Boswellia three times daily to supply Boswellia acids into the body. They recommend searching for capsules that contain 60% boswellic acid because it is the active ingredient. Most retailers sell resin. The raw resin has a hard texture like that of sap. Individuals can extract active ingredients, such as Boswellia acids, from the resin and then add them into a capsule or pill.

People can select between different Boswellia extracts and nutritional supplements. Pure Frankincense essential oil may also deliver active chemicals to the body. Diluting this essential oil in a carrier oil and applying it to your system may allow the chemicals to enter through the skin. It’s important to check the diluted oil onto a small skin area first to check for responses.

Boswellia can also be an active ingredient in organic combinations for inflammation, which often contain additional components, such as garlic. Anyone considering these products needs to speak to their physician before using them to examine potential drug interactions.

Boswellia Serrata is a gum resin extracted from a tree, which is sometimes burnt (the whole species of Boswellia is usually called Frankincense) as an aromatic or administered as medication. It’s most useful for the medication in Ayurvedic medicine, some reading into Traditional Chinese Medicine, and its use extends into the Middle East and other tropical areas.

Active constituents of Boswellia include triterpenoids, beta-boswellic acid. Through its active Boswellic acids, Boswellia Serrata seems to be a novel inhibitory of a pro-inflammatory enzyme called 5-Lipoxygenase and might have other anti-inflammatory effects (for example, NF-kB inhibition, which are much less novel). These anti-inflammatory effects are researched for their advantages in osteoarthritis (OA), and it seems that oral Boswellia supplements may suppress pain and immobility associated with OA quite significantly, with the benefits happening within a week to happen. The studies are well-conducted but financed by the manufacturers of the supplements. There are limited non-funded interventions with Boswellic for this claim, but they appear to agree with the battery of financed study in effect size.

Boswellia seems to be fairly nontoxic, has a history of use as a phytopharmaceutical for brain edema associated with radiotherapy (a cancer therapy ), and the overall anti-inflammatory and anti-cancer effects make it a rather interesting herb relative to others with subpar evidence.

Boswellia seems to serve as an anti-inflammatory. Because of this, it might interact with similar drugs, like NSAIDs. It’s important to talk to a doctor before taking Boswellia along with other medicines, such as aspirin or naproxen. Boswellia can also interfere with the action of certain drugs, such as some anticoagulant drugs and antiplatelet drugs. Anyone taking these drugs should speak with a physician before taking Boswellia.

Side effects and dangers

An individual could speak to their physician about how Boswellia may interact with other medications.

Boswellia is a pure extract, but it could nevertheless have side effects. It could cause digestive side effects, such as nausea, acid reflux, and diarrhea. Some individuals may experience skin problems when using Boswellia, particularly if they apply it directly to the skin.

Boswellia has a long history of medicinal use in organic practices. Early research indicates that it is apparently a powerful anti-inflammatory and that it’s promising as a supportive treatment for various inflammatory disorders within the body.

While the present research on Boswellia is promising, it is still in an early stage. More clinical trials and studies in humans are required to validate the health benefits of using Boswellia.