Why Am I Craving Salt, What It Means 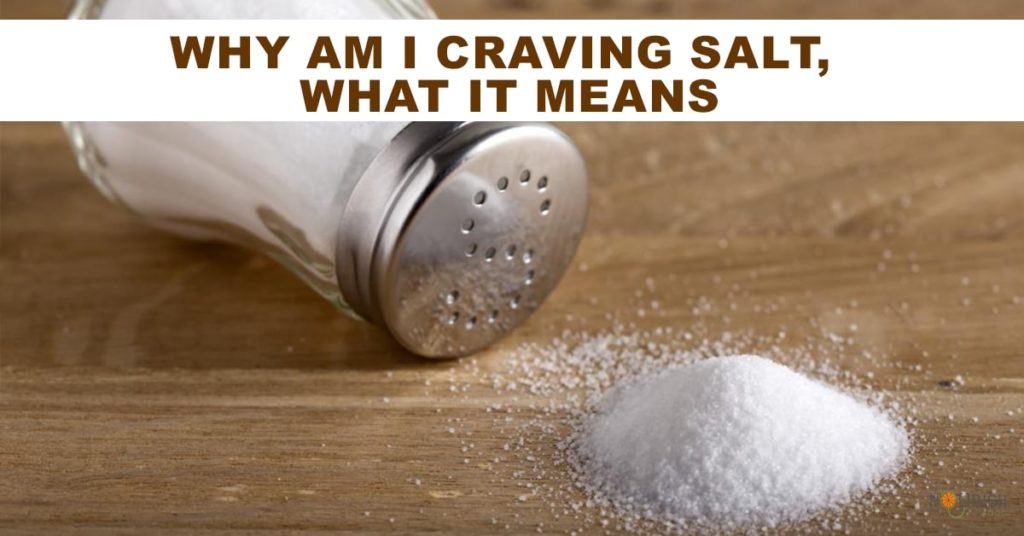 Why does your body need salt?

What does craving salt mean?

Salt contains ions of sodium and chloride. Sodium-ion, which is found in table salt, is required by our body to serve numerous roles. A certain level of salt in our body helps regulate cardiovascular activity, fluid balance, and nerve signaling.

Our body strictly regulates and maintains sodium levels, which are ingested from external food sources, as your body cannot metabolically create sodium by itself. When your body runs low on sodium levels, your brain stimulates specific appetite signals that drive sodium consumption.

Salt craving is a desire to consume an excessive amount of salt or salty foods. It usually occurs when there is a decrease in the body’s sodium content, either from loss of excess sodium or from the body’s inability to retain salt in the body.

Our bodies derive salt from our diet in the form of sodium chloride. An adequate intake of sodium is essential for the physiological functions and optimal growth of an individual.  Sodium is required to maintain bone strength and muscle weights,  glucose metabolism, and blood viscosity. Sodium ions determine the membrane potentials in excitable cells and participate in various metabolic reactions of the body. An adequate intake of salts is necessary for optimal growth. Also, either a deficit or excess of sodium will alter the overall fluid balance and distribution.

Why does it mean when I crave salt?

Why am I craving salt?

Sodium appetite is associated with the central nervous system’s mechanisms, altering the need for salty substances. Craving salt means your body is undergoing sodium depletion, and it requires salt to regulate your body functions making your taste palates crave salty foods like fries, chips, or popcorns. In other words, this is also known as a hedonic shift, where your body is experiencing salt depletion.

How much salt is sufficient for your body to regulate the physiological functions? The average salt intake per individual is found to be approximately 10 g/day, while the FDA recommends it taking 6 g of salt daily.

What are the causes of salt craving?

Salt cravings are a result of underlying medical conditions. But this cannot be the reason most of the time. So, what does craving salt means? Sometimes, salt cravings can also result due to unhealthy food habits which we retain during our life. This article explains various risks associated with sodium deficiency and how it can manifest as cravings for salty snack foods.

1.       Dehydration – Dehydration is a result of the body’s drop in fluids below a certain level. Dehydration alters with the body’s normal functioning. Salt cravings, when dehydrated, is your body signaling you to drink more water and eat more often. To understand your body is dehydrated, you will see some of these symptoms:

Sweating excessively also makes the body dehydrated if you do not replenish your body with water. The sodium levels drop, and you will begin to crave salt.

Electrolyte-enhanced drinks or sports drinks are recommended to be taken during this imbalance, especially if working under hot conditions for prolonged hours.

3.       Addison’s Disease – This is a rare disease caused by a decrease in the hormone levels produced by the adrenal glands. These hormones regulate blood pressure and control the body’s response to stress. As a result, this condition can cause very low blood pressure and sudden cravings for salt. Symptoms to identify this disease are: [1,3]

People with this disease are found to crave salt more frequently.

4.       Stress – Adrenal glands are responsible for releasing cortisol, which regulates your blood pressure and body’s response to stress. When under stress, your body releases lower levels of cortisol. Salt cravings are your body’s way of dealing with unusual stress. It comes in the form of craving ‘comfort food’ rich in fat, sugar, or salt, and hence – sodium.2.

5.       Lack of Sleep – For many who do not get enough sleep, the midnight snack is a way of satisfying the soul and your body craving salt. Lack of sleep and unhealthy snacking results in weight gain often.2.

6.       Bartter Syndrome – If you have Bartter syndrome, it means that your body is unable to reabsorb sodium, which makes you crave more of it. It is a kidney disorder and can be identified by these symptoms:2.

7.       Pregnancy – If you are an expecting mother, vomiting and dehydration are early signs of your pregnancy. It’ll make you easily dehydrated. As a result, you will tend to crave salts to restore the imbalance.2.

8.       Premenstrual Syndrome – PMS is experienced by most women who usually show up during the start of the menstrual period. A wide range of symptoms varies amongst all women, and not every woman experiences PMS. Women who suffer from PMS crave for either salty or sweet foods due to hormone fluctuations in their body.3.

It is not especially to do with your hormonal cycle, but if you crave salt, it might be an indication of adrenal fatigue. Cortisol is the awake hormone, but in large quantities, it is your stress hormone. Cortisol is necessary for our survival. If we have been stressed for a long period, it begins to rob another hormone called aldosterone, which is known as our salt saver. It can cause you to excrete more salt than we should so we could begin to crave additives more. In case you have salt cravings, mineralized salts, herbs, and nutrients may be needed to support your adrenal glands. You can see a functional medicine doctor or a naturopath for consultation.

9.       Cystic Fibrosis – It is a hereditary disease that affects the lungs and digestive system. It can get quite severe and decreases life expectancy. A person suffering from cystic fibrosis can make the body use up excessive salt, causing dehydration and making you crave for salt and water. Symptoms of Cystic Fibrosis include:

– Why You Crave Salt On Keto: There are numerous reasons why people begin to crave more salt when changing to a ketogenic diet.

– Electrolyte Imbalance: All you ate previous to beginning a ketogenic diet was likely salted up quite a bit. As none of your meals is pre-salted, and you have eliminated a vast majority of carbohydrates when beginning keto, your body is expelling water and electrolytes. It is the same reason athletes need sports drinks because when they sweat, they also lose electrolytes. Sports drinks are fortified with potassium and sodium to help replenish potassium and sodium lost through perspiration and urination. Electrolytes are significant, particularly when first starting a ketogenic diet, most notably sodium and potassium.

– Low Insulin; You might think of insulin as the regulator of blood glucose, but insulin also helps the body maintain sodium. Without insulin, the kidneys can filter it in the urine at a much faster speed. In a 2012 study, this was shown by Type 1 diabetics who don’t produce insulin, thus have low glucose levels. These people experienced high levels of salt loss through urination. This study revealed the opposite effect; they discovered when given insulin, people’s sodium concentration in their urine was decreased, meaning higher sodium retention. Low carbohydrates = reduced insulin and reduced insulin contribute to increased excretion of sodium through the kidneys.

– Caffeine; Are you a tea or coffee drinker? Lots of individuals following a ketogenic diet appear to boost their caffeine consumption with keto. One study found that one cup of coffee or 90mg of caffeine led to 437 mg of additional sodium loss out the pee. When participants consumed about four cups of coffee, there was approximately a 1,200mg of further reduction of sodium in the urine.

– Stress; Changing diets can cause stress on an individual’s body. Craving salt is one way that your body might be trying to take care of the stress that your body is experiencing. The adrenal glands release cortisol or the stress hormone as a response to pressure. Some research suggests that people with higher levels of sodium discharge lower levels of cortisol. A craving for salt could be your body wanting to address this stressful transition.

What happens if you don’t eat enough salt

In modern society, we are frighten mongered into believing high salt intake will cause an increased risk for high blood pressure, hypertension, or cardiovascular disease in everybody. When you start reducing sodium to less than 3000mg/day, renin, angiotensin II, and aldosterone start to skyrocket.

– The stress hormones noradrenaline and adrenaline are triggered when we limit salt intake.

Higher risk of hospitalization or death

– Restricting sodium to less than 2,500 milligrams daily was associated with a significantly higher risk of mortality or hospitalization than individuals who didn’t restrict sodium.

Reduced sodium also can lead to:

How much salt or sodium do you need on keto? There is a difference between how much salt we need for basic survival and the essential salt intake to flourish. Just how much salt you need is person, your body controls your salt intake, and that is why somebody may crave salt less or more than another despite eating the same quantity of salt. Your body has built-in mechanisms to control these cravings.