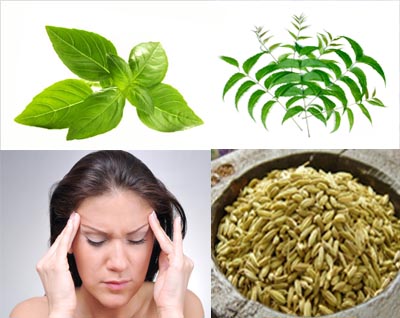 Ayurveda is the age-old treatment method that uses natural herbs to cure various ailments in the body. Ayurvedic treatment for sinus infections uses different herbs to reduce the inflammation in the sinuses and reduce the blockage, alleviating symptoms such as headache, facial pain, nasal congestion, vertigo, and blurred vision. The majority of us never consider our sinuses once we take a deep breath through the nose. For others, these small air passages are a source of distress that lasts for many weeks at least four times annually. Let us look at why sinus issues grow and how to help them through Ayurveda.

If you are looking for natural remedies for chronic Sinusitis, Ayurveda should be your first choice. Ayurvedic cure for sinusitis is 100% natural and thus has no side-effects. Moreover, Ayurveda for sinusitis is used to treat the root cause of the ailment and not just the symptoms, therefore offering a holistic solution.

Where are the sinuses? The sinuses are hollow spaces that exist in the bones of your head. There are small openings that connect them to the nasal cavity. Proper functioning of the sinuses is needed as they help to regulate the temperature and humidity of the air you breathe in.  It is also necessary to lighten the bone structure of the head and to give tone to your voice.

The Pathway of Prana

Modern medicine views the respiratory system to consist of the organs involved in breathing. These include the nose, pharynx, larynx, trachea, bronchi, and lungs. According to Ayurveda, energies and substances move through the entire body via different stations –both physical and energetic–called srotamsi. The respiratory tract is part of one channel, called prana vaha srotas (the channel that receives prana).

This channel is remarkably similar to the respiratory system of modern medicine, but its significance and functions are much more expansive. As an example, prana vaha srotas comprises the heart and is also intimately linked to the digestive tract.

The most crucial function of prana vaha srotas would be to circulate prana through the body. It’s the river that nourishes every cell and tissue together with the life-giving forces of prana, oxygen, and energy. This manner, the lungs are very literally breathing for every cell throughout the body.

The purposes of prana vaha srotas also include the following:

– Transformation of food into energy, energy, and consciousness

– Communication with the higher self

The Prana Pathway Significance in Ayurveda

In Ayurveda, every one of the principal stations in the body has a root (Mula), a route through the body (marga), and an opening (Mukha)–each of which is meaningful to the process of restoring equilibrium in a specific channel. The origin can hint at more subtle intricacies and interconnections within the channel system, while the opening is frequently used as an essential access point for recovery.

Sinus issues are actually brought on by an inherent imbalance in Prana Vata (the sub dosha of Vata that modulates the brain, head, and the mind) and Shleshaka Kapha (a sub dosha of Kapha, which modulates lubrication and moisture equilibrium ).

When these two sub-doshas are concurrently imbalanced, another complication arises. Ama, the tacky waste-product of digestion, has blended with Shleshaka Kapha in the nasal area, forming a much more toxic, sticky mucus named Shleshma. Shleshma settles in the region and clogs the channels of the uterus. Because of this restriction and obstructing, Pitta dosha also becomes uncontrollable.

When all of your three doshas are out of balance, immunity is severely compromised. The body becomes a fertile ground for germs, allergens, or germs. Air pollution, stress, fluctuations of cold and hot weather, and lifestyle patterns like eating excessive amounts of cold, sweet, heavy meals, staying up too late, or not getting enough exercise may aggravate the imbalance.

1. Pacify Prana Vata and Shleshaka Kapha by adhering to a Vata-Kapha pacifying diet. Eat foods that aren’t too hot, and also not too chilly. Avoid extreme temperatures in meals like chili peppers or sweet foods and drinks. Favor cooked, warm foods that are mild, nurturing, and easy to digest.

For example, for breakfast, you could eat a stewed apple, and for your evening meal attempt kichari (a mild and nourishing porridge made with two components rice and one part mung dhal) and spiced with the immunity-boosting herbs.

2. Drink loads of water flavored with spices, to purify the sinuses of toxins.  The water intake will permit the built-up toxins to be flushed out. Boil two quarts of water, and then pour the water into an insulated kettle.  Include two leaves of basil, two thin pieces of ginger, four leaves of mint, two parts of clove, and 1/4 tsp of marshmallow root. Keep drinking this water throughout the day, but make it fresh daily.

3. Ensure that your bowel movements are regular, to help detoxify the body and to re-establish a balanced environment in the nasal area. Eat loads of organic fresh vegetables and fruits. Avoid eggplant, banana, tomato, and bell pepper, as they can clog the channels. Do not skip or delay meals, because that will upset the digestive balance and induce more ama to be generated.

Most herbs used for treating sinusitis possess anti-allergic, anti-inflammatory, anti-bacterial properties as well as are high in antioxidants. These properties work on removing toxic elements from the body and cure any infection or allergic reactions that may result in sinusitis. While there are many herbal plants that are used for treating sinusitis in Ayurveda, the three most commonly used ones are Tulsi, Cumin, and Neem. Here is how you can use these Ayurvedic herbs for treating Chronic Sinusitis naturally:

The medicinal plant Tulsi or Holy Basil (scientific name: Ocimum sanctum)can be termed as the king of herbs. This aromatic shrub is a powerhouse of antioxidants and can be used to cure a number of ailments, including chronic sinusitis. According to Ayurveda, Tulsi corrects the balance of Kapha and Vata, the two main elements in the body; and thus cure a number of diseases. Various scientific researches conducted throughout the world have confirmed anti-bacterial, antifungal, and antiviral properties of the herb, which can be used to fight any infection in the sinuses.

Tulsi can be consumed in the form of tea on a regular basis without any fear of side-effects or addiction. You can grind fresh Tulsi leaves and add warm water to it to prepare an aromatic tea that is beneficial for sinusitis. Dried Tulsi leaves are also available in most herbal stores. You can use this dried Tulsi alone to make refreshing Tulsi tea or can mix them with some green tea for added flavor.

Neem, Azadirachta Indica, as it is scientifically called, is another herb that can be used as an Ayurvedic cure for sinusitis. While Neem is used extensively in skin-care products for its anti-bacterial and anti-inflammatory properties, it can be used to treat chronic sinusitis too. The anti-bacterial properties in Neem work wonders in preventing and treating Sinus infections, while the anti-inflammatory properties help reduce the swelling in the sinus, reducing blockage.

You can use fresh or dried Neem leaves for preparing tea. However, considering the bitter taste of Neem leaves, you can also opt for Neem capsules, which are readily available in health stores or herbal stores. Apart from being beneficial for Sinusitis, Neem is also excellent for improving oral hygiene and skin health.

Cumin is a wonderful herb with loads of antioxidants. While cumin seeds are widely used in Indian cooking, these tiny seeds are an excellent cure for sinusitis too. The anti-bacterial, antifungal, and anti-inflammatory properties in cumin seeds are helpful in fighting inflammation as well as fluid build-up caused by sinus infections.

You can make a fresh paste of cumin seeds mixed with a teaspoon of honey and consume once a day to relieve sinus headaches.

If you are looking for Ayurvedic treatment for sinus infections, then these three herbs are your best choice. While they are highly effective in curing chronic sinusitis, they are well available and offer 100% natural, side-effect free cure too.