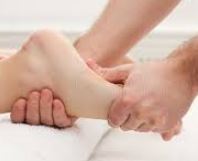 Acupressure is the application of pressure or localized massage to specific sites on the body to control symptoms such as pain or nausea. It is a type of complementary and alternative medicine. It is a form of touch therapy that uses the principles of Acupuncture and Oriental medicine. In acupressure, the same points on the body are utilized as in acupuncture, but are stimulated with finger pressure instead of using the insertion of needles. Acupressure is used to alleviate a variety of symptoms and pain. Shiatsu massage is very closely linked to acupressure, working with the very same points on the body and the exact same general principles, though it was created over centuries in Japan rather than in China. Reflexology is a form of bodywork based on acupressure concepts. There is an increasing number of practitioners who practice bodywork technique of Jin Shin Do that combines acupressure, Qigong, Reichian theory, and meditation.

Acupressure is essentially a method of sending a signal to the body (by fingers) to “turn on” its own self-healing or regulatory mechanisms. Normally, Qi (vital energy) circulates through natural pathways in the body called meridians. Blockage of this flow or an imbalance in Yin and Yang can cause illness and pain. Acupressure helps to correct functional imbalances and restore the flow thus returning the body to a more natural state of well-being. Acupressure is an effective form of stimulation used to help relax the muscles. If done regularly, this method of self-massage can sustain improvement and minimize recurrence of symptoms. Be patient and consistent when practicing acupressure on them. A simple way to stimulate these points is to press firmly with a finger in a rotary movement or an up-and-down movement for several minutes at a time. It is recommended that you use this information under the guidance of your physician.

Chinese
medicine has developed acupuncture, acupressure, herbal remedies, diet,
exercise, lifestyle changes, and other treatments as part of its therapeutic
procedures. Nearly all the types of Oriental medicine that are used in the West
today, including acupuncture, acupressure, shiatsu, and Chinese herbal
medicine, have their roots in Chinese medicine. One legend has it that
acupuncture and acupuncture evolved as ancient Chinese healers studied the
puncture wounds of Chinese warriors, imagining that certain points on the body
created interesting results when stimulated. The oldest known text especially
on acupuncture points, the Systematic Classic of Acupuncture, dates back to 282
A.D. Acupressure is the noninvasive type of acupuncture, even as Chinese
physicians determined that stimulating points on the body with massage and
pressure could be effective for treating specific issues.

Acupressure
massage conducted by a therapist may be quite powerful both as prevention and
as a treatment for many health ailments, including headaches, general aches and
pains, colds and flu, asthma, allergies, asthma, nervous tension, menstrual
cramps, sinus problems, sprains, tennis elbow, and toothaches, amongst others.
Unlike acupuncture that demands a visit to an expert, acupressure can be
performed by a layperson. Acupressure techniques are quite easy to learn, and
also have been used to provide fast, cost free, and effective relief from many
symptoms. Acupressure points may also be stimulated to boost energy and
feelings of wellbeing, reduce stress, stimulate the immune system, and also
relieve sexual dysfunction.

The body is
viewed as small part of the universe, subject to harmony and balance that
exists everywhere. Chinese medicine does not create as eloquent a distinction
as Western medicine does between mind and body. The Chinese system considers
that emotions and psychological conditions are every bit as powerful on
disorder as only physical mechanisms, and considers factors such as
environment, work, and relationships as fundamental to a patient’s health.
Chinese medicine also uses very different symbols and thoughts to go over the
human body and wellness. While Western medicine typically describes health as
mainly bodily processes composed of chemical equations and reactions, the
Chinese use notions such as yin and yang, chi, along with the manhood to
describe health and the body.

Everything in
the universe has properties of yin and yang. Yin is associated with cold,
female, passive, downward, inward, shadowy, wet. Yang, on the other hand can be
thought about as hot, male, active, upward, outward, light, dry, and the like.
Nothing is completely yin or yang. These two principles always interact and
influence each other, even though the body and its organs may become imbalanced
by having either too much or too little of either.

It is found
in food, air, water, and sun, and it travels throughout the body in channels
called meridians. There are 12 big meridians within the body which transport
energy, corresponding to the 12 chief organs categorized by Chinese medicine.

Infection is
seen as an imbalance of the organs and chi in the body. Chinese medicine has
developed intricate systems of the organs are linked to physical and mental
symptoms, and it’s invented corresponding treatments employing the meridian and
pressure point networks that are classified and numbered. The goal of
acupressure is to stimulate and unblock the circulation of chi, by activating
very specific points, called pressure points or acupoints. Acupressure seeks to
stimulate the points on the chi meridians that pass near the skin, as these are
easiest to unblock and manipulate with finger strain.

Acupressure
can be utilized as a member of a Chinese physician’s prescription medication,
as a session of massage treatment, or as a self treatment for common aches and
disorders. A Chinese medicine practitioner examines a patient very thoroughly,
looking at physical, psychological and psychological activity, taking the
heartbeat usually in the wrists, examining the complexion and tongue, and
observing the patient’s demeanor and attitude, to find a comprehensive
diagnosis of that organs and meridian factors are out of equilibrium. After the
imbalance is located, the physician will recommend particular pressure points for
acupuncture or acupressure. If acupressure is recommended, the patient may
decide on a series of remedies from a massage therapist.

Acupressure
is a safe method, however it Isn’t Intended to replace expert medical care. A
doctor should be consulted if there are doubts regarding medical ailments. If a
problem is chronic, a specialist ought to be consulted; just symptomatic
therapy can exacerbate chronic ailments. Acupressure shouldn’t be applied to
open wounds or in which there is swelling and swelling. Ultimately, particular
acupressure points shouldn’t be stimulated on individuals with high or very low
blood pressure and on elderly women.