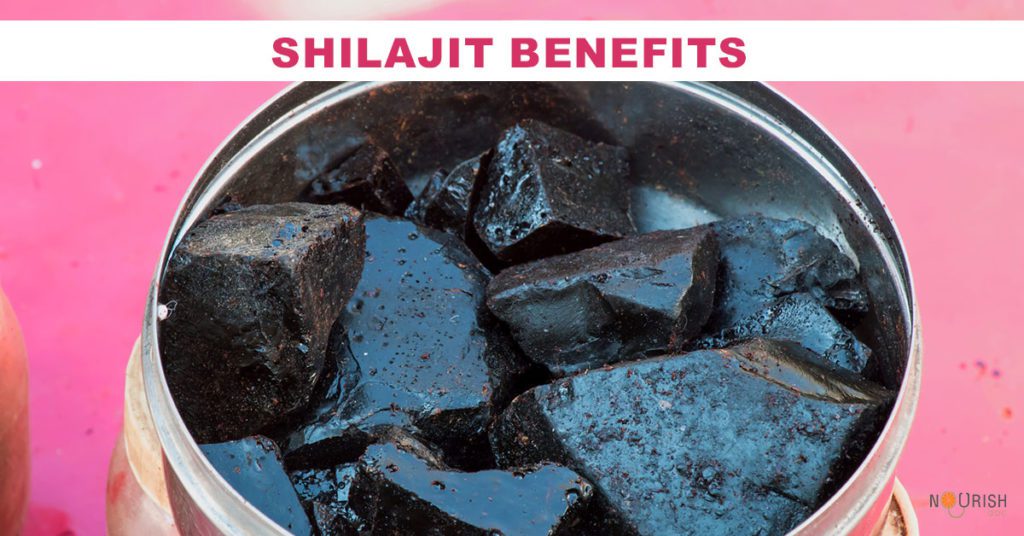 What is Shilajit: Shilajit is a herbomineral constituent used for medicinal properties that have long been used in Ayurveda to relieve various ailments. Shilajit is a combination of organic substances and minerals found in the compressed layers of rocks. The important herbomineral constituents of Shilajit are good for general health and have proved to be effective in restoring the energetic balance and increasing immunity, stamina, and overall health of an individual.

It has been found through recent clinical research studies that Shilajit can serve its functions in various diseases related to male infertility, memory deficit disorders, muscle wasting, fatigue, diabetes,  and diseases of the urinary tract. It also possesses anti-inflammatory activity, antiulcerogenic, anti-oxidant,  and anti-allergic activity.

What are the benefits of shilajit?

Shilajit has been used for centuries in Ayurveda. Here are some benefits of shilajit:

The benefits of Shilajit in Women were also found to be commendable where it’s usage is known to promote good reproductive health in women, correct various infertility issues, helps regulate the menstrual cycle, boosts energy and strength, fights UTI infection, and removes wrinkles from the face while also promoting hair growth.

Numerous scientific-based studies have shown Shilajit to exert antiviral effects. It has been reported that Shilajit has the potential to target the early steps of the replicative virus cycle. Shilajit can prevent the attachment of the viruses to the cell surface by interacting with the virus particles. Thus, resulting in loss of its replication and spread of further infection.2.

Shilajit is a potent free-radical scavenger that can chelate the oxidative free radicals that may damage cells. Increased levels of oxidative enzymes can result in cell damage. Oxidative stress has many negative health consequences as it may generate toxins in the body. These toxins accumulate and lead to various health-related disorders like mental disorders, diabetes, arthritis, heart-related disorders, and fatigue. Shilajit normalizes the SOD activity and reduces the levels of lipid peroxidase.

Shilajit exerts anti-ulcerogenic effects by reducing the amount of acid produced in the stomach. It has also been found to increase the mucosal barrier efficiency by enhancing the peptide output in the body and by increasing the ratio of carbohydrate/protein in the gastric juice.4.

Organic constituents of Shilajit constitute selenium. Research studies have suggested that selenium can modulate the inflammatory cell-signaling pathway by inhibiting the activation of the inflammatory pathway. Selenium arrests inflammation by modulating selenoprotein gene expression. Thus Shilajit is also found to be a beneficial supplement that can be used to treat diseases like arthritis.5.

Shilajit’s most important constituent, called Fulvic acid, a humic substance, has shown growth-promoting effects. Fulvic acid acts as a catalyst and consists of reactive groups like acidic carboxyl and hydroxyl groups that can bind with all the inorganic cations. Shilajit can promote tissue growth by regenerating damaged cells and by facilitating wound healing.7.

Shilajit is a widely used herb for treating issues related to oligozoospermia or aspermia and other male infertility abnormalities related to semen and sperm production.  Shilajit may stimulate the production of semen in men by increasing the biosynthesis of testosterone and activity of testicular hydroxysteroid dehydrogenases.9.

Numerous research studies conducted on Shilajit have proved its benefits in managing chronic diseases like arthritis, diabetes, ulcers, infertility, and many more. Taking Shilajit as a supplement may also enhance the quality of life in people by increasing longevity, limiting allergies, enhancing memory and cognitive function, relieves digestive troubles, and respiratory problems.