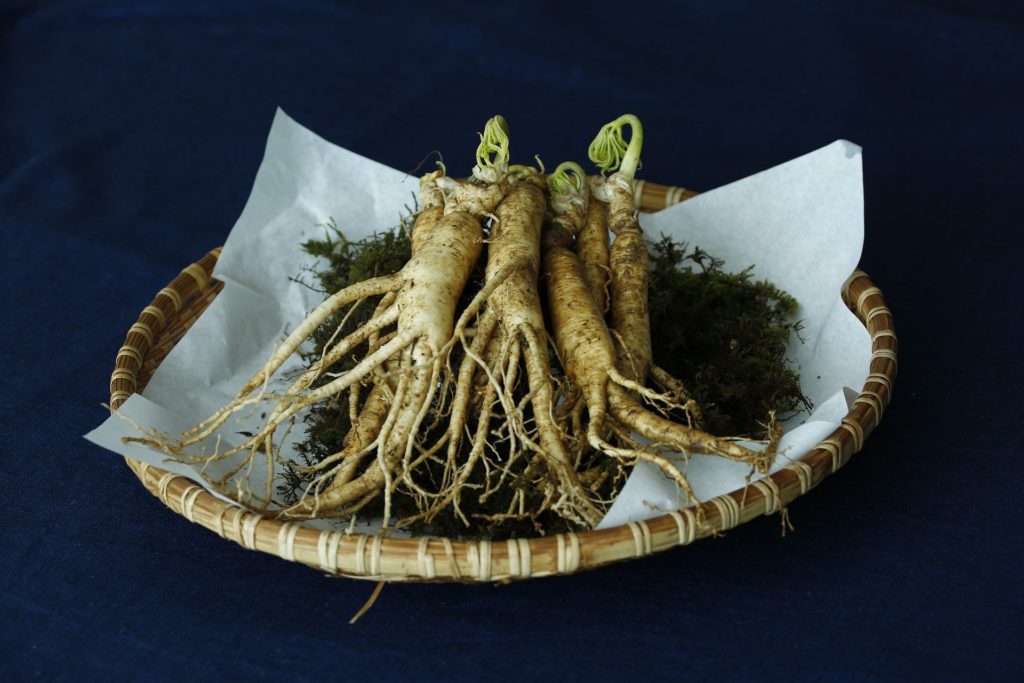 Chronic inflammatory diseases like diabetes and cancer are the leading cause of death worldwide. Years of research have found that in the war against chronic diseases, a “prevention strategy” is much more effective than treatment. This made the scientific community interested in phytochemicals-rich ethnobotanical herbs from Asia, which have a strong antioxidant potential for preventing metabolic and degenerative disorders such as cancers, diabetes, and heart problems. Ginseng is one such traditional medicinal herb that has been used as a general health tonic to promote optimal health and longevity. (1, 2, 3)

Ginseng is a well-known herb in Korea and China. Its polyvalent actions show various therapeutic benefits, i.e., antioxidant, anti-inflammatory, anti-apoptotic, anti-mutagenic, anti-cancer, anti-diabetes, neurovascular, and immune-stimulatory effects, without any serious adverse effects. (3, 4) A 2009 review introduces the ‘Yin and Yang’ theory from traditional Chinese medicine (TCM) perspectives to understand how different varieties of ginseng (i.e., Panax ginseng, Panax quinquefolius, and Panax notoginseng, commonly referred to in English as Chinese ginseng) to balance the dynamic equilibrium of various human physiological processes to show anti-hyperglycemic and immunotherapeutic effects that may be beneficial for type II diabetics and cancer patients. (5)

Ginseng is found effective in hyperglycemia. (2) Panax notoginseng (Burk.) has wide-ranging pharmacological effects due to the presence of chemical compounds such as saponins, flavonoids, and cyclopeptides. (6) In a 2008 study, saponins from Panax notoginseng have shown anti-diabetes properties by effectively improving glucose tolerance; and reducing insulin resistance, fasting blood glucose, and triglyceride levels. (7) These results were confirmed by another 2014 study, where continuous administration of Panax notoginseng saponins (PNS) for 30 days is found effective in reducing insulin resistance and fasting blood glucose (FBG) and serum insulin levels. In this study, PNS also helped lower body weight growth, food consumption, adipose tissue, and leptin. This indicates that ginseng shows anti-hyperglycemic and anti-obesity activities by improving insulin and leptin sensitivities, which can help manage type 2 diabetes. (8)

A systematic review in 2013 reported that Panax ginseng shows promising results for improving glucose metabolism and can be explored as an effective treatment for type 2 diabetes. (9) These findings are further substantiated in a 2015 study, where supplementation with ginseng berry extract has significantly lowered serum insulin levels and insulin resistance scores through a molecular mechanism that improved insulin sensitivity. (10) A more recent study suggests that Rg3 ginsenoside, one of the active components of P. ginseng, improves insulin resistance in skeletal muscle by improving mitochondrial function and the expression of key genes involved in mitochondrial biogenesis. (11)

Another mechanism by which ginseng shows anti-diabetic influence was suggested by a 2007 study, where ginsenosides in ginseng extracts (GE) inhibited cytokine-induced apoptosis in beta-cells. (12) In 2012 another study confirmed this mechanism in beta-cell-deficient mice, where both red and green ginseng berry extract significantly reduced the blood glucose levels, increased glucose-stimulated insulin secretion, and improved overall glucose tolerance, possibly due to beneficial effects on beta-cell regeneration. (13) In a 2016 study, Korean red ginseng was found effective in normalizing hyper-insulinemia and hyper-glycemia in ovariectomized (OVX) mice, a mouse model of postmenopausal women, which proves ginseng as a promising drug for prevention, reversal, and treatment of obesity and related metabolic disorders in obese postmenopausal women. (14)

Natural agents, i.e., ginsenosides found in ginseng, can also help in cancer prevention by inducing apoptosis in cancer cells, suppressing cell proliferation, and cancer-promoting angiogenesis disrupting the tumor microenvironment. (1) A 2007 review found that ginsenosides in ginseng have a ‘Yin and Yang’ action on angiomodulation, where ginsenoside Rg1 stimulates angiogenesis and ginsenosides Rg3 and Rh2 show anti-tumor and anti-angiogenic effects. (15) Another study in the same year reported discovering a novel ginsenoside, i.e., dammarane triterpene sapogenin from the leaves of Panax notoginseng that inhibits growth and survival of cancer cells by inducing cell cycle arrest and apoptosis in human cancer cell lines. (16) As reactive oxygen species (ROS) have been implicated in a variety of inflammatory diseases, including cancer and diabetes, the unique antioxidant mechanisms are another way ginseng shows its pharmacological effect.

A 2014 review discusses another mechanism. Ginseng and ginsenosides activate a key sensor of cellular energy, which switches on catabolic pathways to generate adenosine triphosphate (ATP) and switches off biosynthetic pathways consuming ATP. This mechanism is useful in preventing or reversing metabolic disorders such as type 2 diabetes and cancer. (19) Furthermore, a 2016 study reports that combination treatment showed that ginsenoside enhances doxorubicin-treated anti-cancer activities in cancer cells. These findings suggest that ginseng has therapeutic potential for cancer treatment and can be used as a combination partner with more classic chemotherapeutic agents, such as doxorubicin. (20) A recent meta-analysis also indicates that ginseng consumption can significantly decrease cancer risk and this anti-cancer effect of ginseng is not organ-specific. (21)