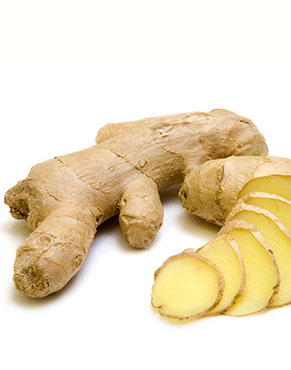 There are countless ways one can consume ginger.
– In hot tea: We drink gallons of hot ginger tea in the autumn and winter. We just cut a chunk of fresh ginger (no need to peel) and pour a good deal of boiling water on it. Just a little honey, a little lemon, and it is the ideal winter tonic.
– Soup: fresh ginger, grated or pureed, brings incredible zest to warm, creamy winter soups.
– Any Asian dish: Just toss freshly cut ginger pieces, sautee, and add to any dish to give it that zing.
– With fish: We love hot ginger with tender, flaky fish.
– In stir-fries: Almost every stir-fry could use a little grated or even minced ginger to spice things up.
– In sweet things: It is baking time, and there are a lot of sweet things which are great with fresh ginger.
– Ginger ale, beer, the list is endless

Ginger contains many antioxidants and anti-inflammatory chemical compounds that are beneficial for health like beta-carotene, caffeic acid, curcumin, capsaicin, and salicylate. All these chemicals act as antioxidants and help to prevent DNA damage in the body, which in turn can help in preventing degenerative diseases like cancer, heart disease, Alzheimer’s,  diabetes, arthritis, and various other ailments.

Ginger has thermogenic properties that help it fight against flu and symptoms of the upper respiratory tract like coughs, colds, sore throats, etc.

Ginger is rich in potassium, magnesium, chromium, manganese, and zinc and has been used to treat heart conditions for years. Ginger helps to lower cholesterol, regulates blood pressure, improves blood flow and prevents the formation of blood clots – all factors that contribute to heart diseases.

Ginger is seen to effectively treat colon, skin, lung, pancreatic, breast, ovarian and prostate cancer, by killing the cancer cells and preventing their resistance to chemotherapy. An anti-cancer drug, beta-elemene is derived from ginger and is widely used in chemotherapy.

Ginger is a flowering plant and is the common name for Zingiber officinale, which was initially grown in the Himalayan foothills of  India. Today, it’s widely grown all around the world as a significant commercial spice crop. The plant’s botanical name derives from its Sanskrit name singabera, which means “horn-shaped,” a physical trait that ginger reflects. Pungent, spicy ginger root is one of the popular root herbs of culinary in addition to medicinal importance. Ginger belongs to Zingiberaceae botanical family that also includes cardamom, galangal, and turmeric.

The rhizome, more commonly referred to as the root, is what you’re likely familiar with. The origin is hot and peppery in flavor, with tons of medicinal properties. It’s used throughout the world in clinical and culinary programs.

Ginger has been known as a superfood for ages, but what makes it so successful? Aromatic, Pungent and spicy, ginger adds a distinctive flavor and zest to Asian cuisine. Fresh ginger is available year-round. The flesh of this ginger rhizome may be yellow, white, or reddish, depending on the variety. A light brown skin coats the ginger to protect all its goodness. Ginger has a pungent, spicy, and aromatic odor that comes from essential oils and phenolic compounds like gingerols and shogaols from the origin.

Native to southeastern Asia, a region whose restaurants still feature this beautifully spicy herb, ginger was renowned for millennia in several areas across the world. Ginger is said in ancient Chinese, Indian and Middle Eastern writings, and praised for its aromatic, medicinal and culinary properties. These days, the top commercial manufacturers of ginger include India, Jamaica, Fiji, Indonesia, and Australia. The ginger rhizome consists of a firm texture and a flavor that’s aromatic and hot.

Historically, ginger has a very long tradition of being very effective in relieving symptoms of gastrointestinal distress. Herbal medicine views ginger as a superb carminative (a substance that promotes the removal of intestinal gas). It also benefits intestinal spasmolytic (a chemical that calms and soothes the intestinal tract). Modern scientific studies have demonstrated that ginger possesses numerous therapeutic properties, including antioxidant effects, an ability to inhibit the formation of inflammatory chemicals, and direct anti-inflammatory consequences.

It contains health benefiting essential oils like gingerol, zingerone, shogaol, farnesene, and tiny quantities of ß-phellandrene, cineol, and citral. Gingerols help enhance the intestinal motility and have been anti-inflammatory, painkiller (analgesic), nerve soothing, antipyretic in addition to anti-bacterial properties. Studies have shown that it might reduce nausea caused by motion sickness or pregnancy and can help relieve a migraine headache.

Studies indicate that zingerone, a chemical compound that gives pungent character to the ginger root, is effective against bacteria (E.coli ) induced diarrhea.

This herb origin only has 80 calories per 100 g and contains no cholesterol. Nevertheless, it composes many essential vitamins and nutrients like pyridoxine (vitamin B-6) and pantothenic acid (vitamin B-5) that required for optimal health.

It also holds the right amount of minerals, such as potassium, manganese, copper, and magnesium. Potassium is an essential part of cell and body fluids, which helps controlling heart rate and blood pressure.

Ginger’s anti-vomiting action has been proven to be quite helpful in healing nausea/vomiting of pregnancy. In a double-blind trial, ginger origin caused a substantial decrease in both the severity of nausea and the number of attacks of nausea in 19 of 27 women in early pregnancy (less than 20 months ). Unlike medication with side effects, ginger is very safe, and just a small dose is necessary.

An overview of six double-blind, randomized controlled trials with a total of 675 participants, published in the April 2005 issue of this journal, Obstetrics, and Gynecology, has verified that ginger is effective in healing nausea and vomiting during pregnancy. The review also confirmed the absence of major side effects.

A clue to ginger’s healing in eliminating gastrointestinal distress is supplied by current double-blind research, which has shown that ginger is extremely helpful in preventing the symptoms of motion sickness, particularly seasickness. In one study, ginger was proven to be much superior to Dramamine, an OTC and prescription medication for motion sickness. Ginger heals most symptoms associated with motion sickness, including nausea, vomiting, & dizziness.

Ginger contains potent anti-inflammatory compounds known as gingerols. These chemicals explain why so many people with arthritis (osteoarthritis or rheumatoid arthritis) experience lower pain levels when they consume ginger. In two clinical trials involving patients who responded to conventional drugs and those who did not, doctors found that 75 percent of arthritis patients and 100 percent of individuals with muscular discomfort experienced relief of pain & swelling.

Spicing up your meals regularly with fresh ginger might help, suggests a study published in a recent problem of Osteoarthritis Cartilage. During this twelve-month study, 29 patients with debilitating arthritis in the knee engaged in a double-blind, crossover study. By the end of the initial six month period, those eating ginger had less pain on motion and handicap than those given placebo.

Gingerols, The critical active components in ginger may also inhibit the growth of human cancer cells.  In an animal study, researchers fed mice specially bred to lack an immune system a half milligram of (6)-gingerol three times per week before and after injecting human colorectal cancer cells in their flanks. Researchers noted the results in their study strongly suggest that ginger compounds may be effective chemopreventive and/or chemotherapeutic agents for colorectal carcinomas.

German Scientists have recently found that sweat comprises a powerful germ-fighting agent that can help fight off infections. Dermicidin, the gene responsible for the chemical and the protein it produces, is produced in the body’s sweat glands, secreted to the perspiration, and hauled into the skin’s surface. It provides protection against invading bacteria and fungi.

Ginger packs active substances in high concentration – so you do not need to use very much to get its beneficial consequences. For nausea, ginger tea made by using a couple of small pieces of fresh ginger in a cup of warm water for your upset stomach.

Ginger root pieces, boiled in water with lemon or orange juice, and honey, is a popular herbal beverage in Ayurvedic medicine to alleviate common cold, cough, and sore throat.

Its extraction is employed as a vehicle to conceal bitterness and aftertaste in Ayurvedic formulations.

Gingerols help the motility of the gastrointestinal tract and also have analgesic, sedative, anti-inflammatory, and anti-bacterial properties. Studies show that it might help reduce nausea due to motion sickness or pregnancy and can help relieve a migraine.

When buying fresh ginger root, make sure it’s firm, smooth, and free of mold. Ginger is usually available in two forms, either young or older. Mature ginger, the more widely available form, has a tough skin which needs peeling while young ginger, usually only available in Asian markets, doesn’t have to be peeled.

Ginger is also available in many different forms, including crystallized, candied and pickled ginger.

Ginger can be grown in your home garden plant or as a potherb. It’s new leaves, and roots can be easily picked up for immediate usage. In the shop, however, choose organic, fresh root over the dried form because it’s superior in quality and taste.

Ginger stimulates many secretory glands within the body and can increase salivary juice secretion in the mouth; increase bile secretion and its discharge.