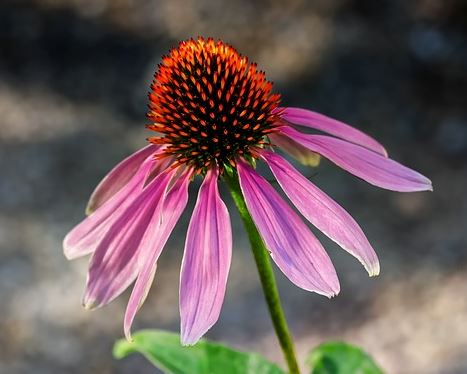 The genus Echinacea is from the Compositae family, commonly called the sunflower family. Of the species known, it is the E. purpurea, E. angustifolia, and E. pallida that are generally used in herbal medicine. It is the extracts derived from the root and aerial parts that are commonly utilized in the United States and Europe as non-specific immunostimulants and to prevent or treat the common cold and flu. But, natural products differ greatly in composition, mainly because of the usage of distinct species, variable plant substances or extraction procedures, and the inclusion of other elements. In vitro and in vivo studies indicate immunostimulatory and anti-inflammatory consequences. A standardized echinacea preparation inactivated flu viruses and might improve respiratory activity. In animal models, Echinacea stimulated erythropoiesis, higher blood-oxygen transport, produced anxiolytic effects, and exhibited wound-healing properties.

Echinacea is a prevalent herb, and individuals commonly take it to help fight colds and influenza. It’s a genus of herbaceous flowering plants in the daisy family — Asteraceae. It’s also known as the American coneflower.

Echinacea is available over the counter (OTC) in pharmacies, health stores, and online as liquid extracts, a dried herb,  teas, and as pills or capsules. Echinacea advocates say the herb promotes the immune system and reduces the number of symptoms of colds, influenza, and several other disorders, infections, and ailments. Some people also feel that Echinacea can relieve pain, prevent cancer, improve mental health, and alleviate skin issues. But the scientific community doesn’t agree on the benefits of echinacea tea. Some have even voiced concerns regarding echinacea side effects.

Native Americans used Echinacea for centuries before the arrival of settlers and colonizers. They used Echinacea Angustifolia widely for medical purposes. It is found commonly found in North America and thrives in prairies and open woodlands. In the 1800s, Echinacea became a popular herbal remedy for people who had settled in America and shortly became commonly used in Europe too. It became far more popular after research on it had been completed in Germany in the 1920s. Echinacea was used in the early 20th century,  for treating other conditions such as pain reliever and anthrax infections. In the early 1930s, Echinacea became popular in North America as herbal medicine. Echinacea was used as a remedy for the common cold when a Swiss nutritional supplement manufacturer mistakenly understood that it might prevent colds. Native Americans gave it the name “elk root” because people learned to use Echinacea by viewing elk seeking out the herb and ingesting it whenever they were hurt or ill.

Echinacea has a storied history of being used in herbal treatments. American Indians are thought to have used the remedy for a wide selection of ailments before western settlers started using it in the 1800s. Since it has a long history of use, researchers have been studying the herb for decades with mixed results.

Echinacea is widely touted as a resistant booster, which may help prevent cold and flu. However, there’s insufficient evidence to support these claims.

In 2014, the Cochrane Database Systematic Reviews examined 24 double-blind trials using Echinacea on a total of 4,631 participants. They found weak evidence to back up the herb’s efficacy in preventing or treating colds and influenza.

One study included in the review discovered that Echinacea might lessen the duration and severity of colds when compared to a placebo, but the review authors noted that the effects weren’t clinically significant.

Today, Echinacea is used widely all around the world for a selection of illnesses, infections, and ailments. Some of these applications are flu, acid indigestion, chronic fatigue syndrome, pain, and migraine.

Echinacea is a perennial plant, and approximately 1-2 ft tall when it matures. It’s slightly spiky and has big purple to pink flowers, depending upon the species. The center of the flower has a cone, which can be dark brown.  Echinacea is offered in various forms, including pills, liquid, and dried herbs. Echinacea has a complex mixture of active substances, some of which are reported to be antimicrobial, while others are thought to influence the human immune system.

Echinacea tea is a natural beverage most commonly produced from the Echinacea purpurea plant. Several others, including E. Angustifolia and E. pallida, may also be utilized as an ingredient in several extracts and teas. Typically, the purple, cone-shaped flower of this plant is dried or cut fresh to make tea, but echinacea leaves and roots may also be utilized. The flavor of echinacea tea is frequently described as tongue-tingling. In actuality, some herbal product manufacturers regard this quality as evidence of the herb’s effectiveness. Echinacea is usually blended with mint or with other ingredients like lemongrass to generate a more pleasant-tasting tea.

If you do not like the taste of echinacea tea, many cold and flu sufferers consume Echinacea in pills or tinctures. There’s no caffeine in echinacea tea, as some might expect. The herbal tea isn’t made like traditional tea, which can be fabricated using leaves from the Camellia sinensis plant. If you drink this herbal tea, then you aren’t likely to get the boost of energy that you are likely to get from drinking caffeinated teas.

All species of the herbal remedy have chemicals called phenols. Many plants contain phenols, active compounds that control the action of a range of enzymes and cell receptors, and protect the plant from diseases and ultraviolet (UV) radiation damage. Phenols have antioxidant properties, which might have health benefits. Echinacea contains alkylamides or alkamides, (not in Echinacea pallida), which influence the immune system, in addition to polysaccharides, glycoproteins, and caffeic acid derivatives.

Echinacea is considered safe for most people when taken by mouth in the short term. Many liquids and solid forms of Echinacea have been used safely for up to ten days.

Some side effects have been reported like nausea, vomiting, bad taste, stomach pain, fever, sore throat, dry mouth, headache, numbness of the tongue, dizziness, difficulty sleeping, a feeling that was disoriented, and joint and muscle aches. In rare situations, Echinacea has been reported to cause inflammation of the liver.

Implementing Echinacea into the skin can lead to redness, itchiness, or a rash.

Echinacea is the most likely to trigger allergic reactions in children and adults that are allergic to ragweed, mums, marigolds, or daisies. In case you have allergies, make sure you consult your healthcare provider before taking Echinacea.

Laboratory Tests have demonstrated that some echinacea products are tainted with arsenic, lead, or selenium.

Research on the benefits and risks of Echinacea is continuing. Several health statements and accusations about the efficacy of Echinacea have been created.  Some studies were done in the mid-1990s, such as randomized trials. However, nearly all were sponsored by echinacea producers and entrepreneurs and weren’t considered by the scientific community as being of high quality. Most reported that the benefits of the herbal remedy.

Does Echinacea have any impact on catching colds or reducing symptoms of a cold?

Studies have produced differing conclusions. Researchers at the University of Connecticut reviewed research studies on the effects of Echinacea on people’s risk of catching a cold. They found that Echinacea could lower a person’s chances of catching a cold by roughly 58 percent. They found that the herbal remedy also decreases the amount of time a cold lasts by 1.4 days.

On the other hand, scientists reported in the Dec 2010 issues of the Annals of Internal Medicine that Echinacea does not have any substantial impact on the frequent cold and just reduces the length of symptoms by half a day at the most. Scientists in CMAJ (Canadian Medical Association Journal) (October 2005 issue) reported that ginseng lowers the frequency of colds, but Echinacea doesn’t. A Cochrane review from 2014 reasoned that “Echinacea products haven’t been shown to provide benefits for treating colds.”