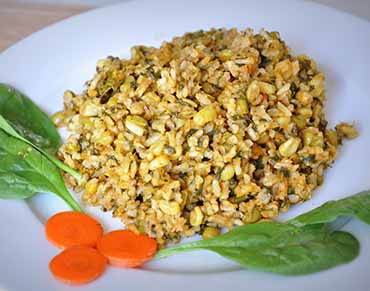 Rice is usually not recommended for diabetics as it causes a sharp rise in blood glucose levels. To counteract this effect, this brown rice pulao recipe has been made by using high fiber brown rice tossed with a variety of vegetables along with some diabetes-friendly ingredients to create a hearty rice delicacy. This main course uses brown rice which is high in fiber, magnesium and has a low glycemic index which prevents a spike in blood glucose levels.


• Heat oil in a pressure cooker and add onions.
• Sauté till the onions turn translucent and then add ginger garlic paste. Cook for a minute.
• Add tomatoes, brinjal, sliced mushrooms, fenugreek leaves and cook on a medium flame for 1-2 minutes stirring occasionally.
• Now add the brown rice, mix well and then add a cup of water.
• Add salt, cinnamon powder and pressure cook for 4 whistles or till the rice is done.
• Serve hot.

Use brown rice instead of white rice so you can manage your diabetes and prevent blood sugar spikes.

Researchers at the Medical College of Georgia found that a diet rich in brown rice protected against diabetes neuropathy, due to its high fiber content. Moreover, cinnamon and fenugreek, present in this recipe, naturally fight diabetes. Cinnamon also increases the gastric emptying time, thus preventing a sharp rise in postprandial blood sugar levels. Fenugreek, on the other hand, contains an alkaloid called trigonelline which helps in lowering the blood sugar levels.

1. Brown Rice: It is well known that white rice can have a negative impact on blood glucose. Like many other white or processed foods, it can cause blood glucose spikes – not great for people suffering from diabetes type 2 or prediabetes. A moderate quantity of healthy whole grains, such as brown rice, along with other fiber-rich foods rather than processed grains, can reduce the risk of complications such as diabetic neuropathy, which can be nerve damage caused by high blood glucose.

Brown rice is full of fiber, an essential element for diabetes control. As fiber is not readily digested by the body, it doesn’t affect glucose levels. This can help to keep blood glucose levels stable and prevent glucose spikes.

2. Fenugreek has been used for medicinal purposes since ancient times. Fenugreek seeds may be useful for those who have diabetes. The seeds contain fiber and other substances that may slow digestion and the body’s absorption of sugar and carbohydrates. The seeds may help how our body uses sugar and increases the quantity of insulin released.

There is some research that suggests fenugreek as an effective remedy for certain conditions. A number of these studies focus on the seed’s ability to reduce blood glucose in people with diabetes. A little 2009 research indicates that eating baked goods, such as bread, made with fenugreek flour may decrease insulin resistance in people with type 2 diabetes. Other research noted a modest reduction in fasting glucose with fenugreek taken as a nutritional supplement. Fenugreek capsules and teas are used around the world by nursing women.

One research study showed that consuming 500 mg of cinnamon extract daily for 12 weeks decreased a marker of oxidative stress by 14 percent in adults with prediabetes. This helps diabetics since oxidative stress has been implicated in the development of nearly every chronic illness, such as type 2 diabetes