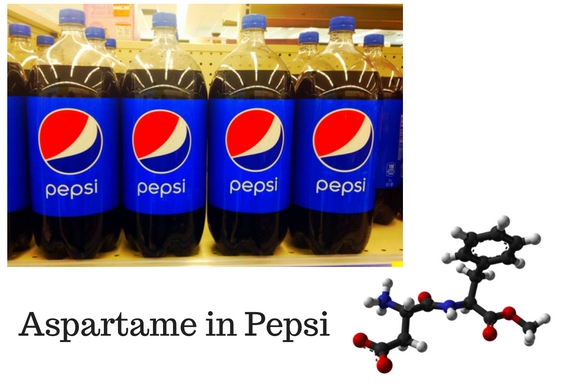 The company had removed the artificial sweetener from its product August 2015 because that was “the number one request by the customers’, and replaced it with the safer ‘sucralose’, commonly known as Splenda. Less than a year after, the new Diet Pepsi sales saw a 10.6 percent decline, prompting PepsiCo to bring aspartame back.

Why is Aspartame bad?

You’ve probably heard about aspartame and its bad reputation as one of the most controversial and harmful sweeteners in the world. Most people know that aspartame is “bad”, but reasons for its notorious reputation aren’t always clear.

Although aspartame is approved by the food and drug administration (FDA), various studies showed that aspartame is linked to an increased risk of cancer in lab mice.

Additionally, aspartame accounts for 75% of the side effects to food additives in the US, according to science based medicine.  Some adverse reactions to aspartame are quite serious and include:

That’s not all; the following chronic illnesses can aggravate due to aspartame consumption:

For those looking to lose weight and lead a healthy lifestyle, the choice isn’t only between high calorie refined sugar and risky artificial sweeteners.  There are sweeteners that are both natural and low in calories such as stevia, xylitol and yacon syrup. Those who are concerned only with making the healthy choice, and not with the caloric content of the sweetener can use sweeteners like honey, maple syrup. coconut sugar, dates, blackstrap molasses and brown rice syrup.

Pepsi will continue to offer its healthier Sucralose Diet Pepsi as its primary Diet Pepsi packaged in silver cans, while the aspartame Diet Pepsi will be branded as “classic” ad packaged in light blue. Pepsi MAX will also be reintroduced as Pepsi Zero Sugar and it will contain aspartame.

A thought to consider: the fact that major company like Pepsi listened to the demands and concerns of consumers and decided to use a healthier diet sweetener and keep it as its primary diet sweetener can only inspire people to suggest the same to other manufacturers.