Is green tea good for you 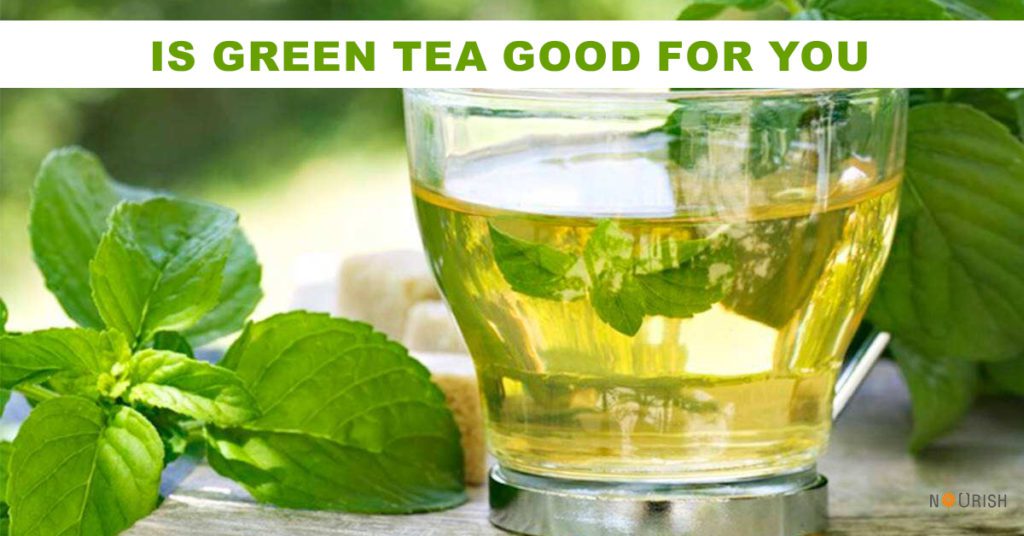 Green tea comes from the plant Camellia
sinensis. It can be made to green, white, black, oolong, or pu erh tea. Green tea includes a high number of
antioxidant polyphenols called catechins that may be used to fight the
negative effects free radicals cause in the human body. An amino acid found almost exclusively in green tea, also called L-theanine can pass the blood brain barrier and interact
with the brain directly. Green tea (and other teas) also contains
caffeine, which has a stimulating effect on the CNS and also provides some
medicinal activities towards the cardiovascular system. It may be the healthiest drink available.

What is green tea good for?

Green tea
is loaded with antioxidants and nutrients that have beneficial effects on the
body. These benefits include improved heart & brain function, lowering of cholesterol
& fat, skin care, a lower risk of cancer, and many other impressive
benefits.

Tea has
shown promising advantages in association to heart health. Flavonoids in green
tea can help prevent oxidation of LDL (bad) cholesterol and decrease blood
clotting. Studies show green tea may also help lower blood pressure,
triglycerides, and total and LDL cholesterol. A 2006 JAMA study concluded that
green tea consumption is associated with reduced death rates due to all causes,
including heart disease. The study
followed over 40,000 Japanese participants for 11
years and found that the participants who drank at least 5 cups of green
tea daily had a significantly lower chance of dying (particularly from
cardiovascular disease) than those who drank less than one cup of tea daily.

An
analysis of published studies in 2011 discovered that consuming green tea,
possibly as a drink or in capsule form, was connected to significant but small
reductions in total and LDL or “bad” cholesterol.

Besides
cardiovascular wellness, tea extracts and Polyphenols also have shown promising
effects in cancer research. Tea and tea elements have been demonstrated to
inhibit carcinogen-induced DNA damage in several of cell studies, in addition
to inhibit tumor growth at different organ websites.

Studies on
the effects of green tea in cancer prevention have shown to have a potential
effect on liver, breast, prostate, and colorectal cancers. These studies
suggested the more cups of green tea consumed daily over several years
continues to decrease one’s chance of those cancers. According
to the National Cancer Institute, the polyphenols in tea have been shown to
reduce tumor development in lab and animal studies and might protect against
damage caused by ultraviolet UVB radiation.

In countries
where green tea consumption is high, cancer occurrences tend to be reduced, but
it’s not possible to know for certain whether it’s the green tea which prevents
cancer in these populations or other lifestyle variables. Researchers
believe that it is the high level of polyphenols in tea that will help kill
cancerous cells and prevent them from growing. However, the specific mechanism
by which tea interacts with cancerous cells is unknown. Other studies haven’t
found that tea can decrease cancer risk.

Green tea
has also proven to be anti inflammatory, which can help keep your skin clear
and glowing. One study demonstrated applying green tea can even alleviate skin
conditions like acne and rosecea. The existence of polyphenols in green tea has
also proven to be a miracle for your own skin, as they could shield against
harmful UV rays, which can be connected to wrinkles, skin cancers, and dark
spots.

Green tea
is rich in catechins, which are antimicrobial and help destroy bacteria that
are senile. Additionally, it has anti-inflammatory properties that help reduce
the inflammation and redness that’s often brought on by acne. When consumed,
the tea also can help treat hormonal imbalances which can often cause acne.
Green tea is loaded with antioxidants which help neutralize damage-causing free
radicals, protecting your skin tissues and keeping them healthy. The
antioxidants in green tea also help heal scars and marks which are often left
behind from acne. Large pores bring dirt and grease, resulting in the formation
of a acne or pimple. Green tea acts as an efficient toner that unclogs and
refines your pores.

The tea
also helps soothe your face, reduces redness, and treats existing acne. The
EGCG catechin in green tea helps get rid of acne if you consume green tea on a
regular basis.

Green tea
can promote a little, non-significant weight reduction in overweight and obese
adults, because weight loss in the research was so minimal, it’s unlikely that
green tea is clinically significant for weight loss. Evidence supporting tea as
a weight-loss aid is based mainly on studies analyzing the effects of teas
extracts, such as catechins and caffeine, so results might not be directly
related to brewed tea. However, research indicates green tea catechins and
caffeine can stimulate thermogenesis, resulting in a possible increase in
energy expenditure.

Several
studies have shown implications of green tea consumption on reducing abdominal
fat and waist circumference in somewhat overweight participants. But while
green tea has shown to assist in weight loss, it shouldn’t be viewed as a
cure-all, since it only creates a small impact, and is less significant than
eating a wholesome diet or engaging in daily exercise.

Drinking
green tea or coffee on a regular basis is correlated with a reduced risk of
stroke, according to a study published in the journal Stroke: Journal of the
American Heart Association. The lead author of the study, Dr. Yoshihiro Kokubo,
Ph.D analyzed the combined effects of the green tea and coffee on stroke risks.
A modest but positive lifestyle change to reduce the risk of stroke could
happen with the addition of daily green tea to your diet.

Studies have
not been able to definitively demonstrate the benefit of green tea for
diabetes. Some studies have shown a lower risk of developing type 2 diabetes
for green tea drinkers, compared to those who consumed no tea. Other studies have
found no association between tea consumption and diabetes in any respect. The
jury is still out on this one.

A 2007
study concluded that green tea could hold promise as a new treatment for skin
ailments like psoriasis and dandruff. Researchers studied an animal model for
inflammatory skin diseases, frequently characterized by patches of dry, red,
flaky skin caused by the inflammation and overproduction of skin cells. Those
treated with green tea showed slower growth of skin cells and the existence of
a gene that regulates the cells’ life cycles.

Research
published in the journal Psychopharmacology indicates that green tea can boost
our brain’s cognitive functions, especially the working memory. The study team
said their findings suggest that green tea could be promising in treating
cognitive impairments such as dementia.

Green tea in high-doses can possibly cause side effects due to the caffeine.
These side effects may range from moderate to severe and include headache,
anxiety, sleep issues, vomiting, nausea, irritability, irregular heartbeat,
tremor, heartburn, nausea, ringing in the ears, convulsions, and confusion.
Green tea also appears to decrease the absorption of iron from meals.

The
popularity of green tea is mainly because of the high amounts of antioxidants and
nutrients it contains. Studies show that green tea drinkers are likely to live longer healthier
than non-green tea drinkers. In order to live healthier, look good, lose weight and
lower your risk of chronic diseases, consider making a moderate amount of green tea a part of your
life.