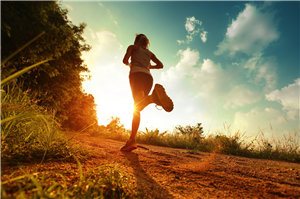 Exercise and
its Clinical Benefits in Patients with Depression

Background: At
the most basic level, when a patient is diagnosed with some sort of specific
disease or condition, there is usually a list of pharmacological options that
are available to help treat the disease itself or its accompanying symptoms.
However, what if patients are against taking medicinal options and wish to
explore other possibilities of treatment. This inflection point could be
rectified with the involvement of exercise. There have been many studies that
have been conducted and are still emerging that are indicative of the clinical
benefit of exercise on depression. In a study by Blumenthal et al, 202 patients
who met the criteria for major depressive disorder (MDD) and were subsequently
diagnosed with MDD were randomly assigned into one of four categories. These
categories were: supervised exercise within a group setting, home exercise, pharmacological
treatment using an anti-depressant called sertraline, and a placebo pill.
(Blumenthal 2007) What investigators found within this trial were that
remission rates were as followed; 45% in patients in the group exercise
setting, 40% within the home based exercise, 47% from the sertraline treatment,
and 31% within the placebo group. (Blumenthal 2007) These results were
conclusive that exercise therapy was comparable in efficacy to the standard
anti-depressant sertraline.

See: How To Manage Fibro Fog Or Chronic Fatigue Syndrome

Furthermore,
from the National Health Service (NHS) UK site, there were a few anecdotes from
patients who had depression and the impact exercise had within their respective
lives. One patient mentioned, “I’m a different person when I exercise
regularly. When I run two or three times a week, my energy and my motivation
lift. I think running really does help protect me from depression. When I don’t
run regularly, I’m more prone to feeling low.” (NHS 2016) An important
consideration to draw from her brief comment was the notion of exercising
regularly. If exercise is something that is variable in terms of what part of
day you’d engage in it, your body inherently will feel less inclined to make an
effort to exercise. In comparison, let’s say you establish a routine where you
would work out at a specific time in the morning, if this was done
consistently, your body gradually becomes programmed to adapt to your gym
routine of going each day.

So the
question soon arrives at the forefront of the mind; how does exercise exactly
help improve depression? In simpler terms, our body synthesizes hormones called
“endorphins” which circulate in our body and peak during different activities
we engage in. (Harvard Health 2009) The role of endorphins is that it reduces
perception of pain through actions within the nervous system and improves mood.
(Harvard Health 2009) During exercise, the levels of circulating endorphins
from your body are elevated which raises the mood of an individual who is
depressed.

Exercises:
There is a wide array of exercises that could be done. My recommendation would
be to pick exercises that improve cardiac function and target your overall
body.

1.
My first exercise would be jogging or walking
for at least 10 minutes each day for at least five days a week.

2.
My second exercise would be to build upper body
strength, to help boost self-esteem and to improve key muscles within your
arms.

3.
My third exercise would be to engage in outdoor
exercises. Many local towns have badminton, tennis, volleyball, and other
outdoor activities.

See: Mindfulness as a Therapy for Reducing Depression