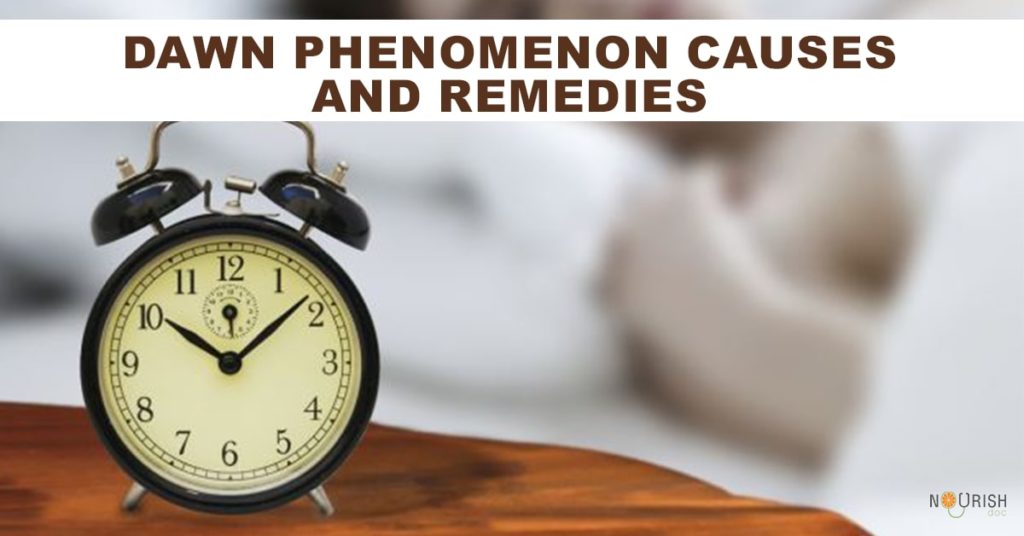 What is Dawn Phenomenon?

Sometimes you observe your sugar levels to be increased, especially during the morning time. This increase can occur due to the dawn phenomenon, which can be daunting. It can be due to munching a snack during the night while going to bed or maybe due to your dietary changes.

The dawn phenomenon is observed in diabetic patients, which refers to periodic episodes of increased sugar levels occurring in the early morning, usually between 2.am – 8.00 am. This condition is commonly observed in people of all ages suffering from type 1 or type 2 diabetes. The condition is often confused with Chronic Somogyi Rebound, which usually occurs during night time. However, the dawn phenomenon is not caused by nocturnal hypoglycemia.

How is the dawn phenomenon caused?

The dawn syndrome is characterized by variation in diurnal hepatic glucose metabolism.  There is a transient increase seen in both glycogenolysis and gluconeogenesis cycle in the early morning hours.  This rise can be responsible for hyperglycemia if unopposed by insulin.

Experts have also suggested Dawn phenomenon to be associated with an overnight release of natural hormones like growth hormone, stress hormones like cortisol, glucagon, and epinephrine. All these factors may lead to insulin resistance, which shoots up your blood sugar levels, especially during the early morning. Higher blood glucose levels in the morning may also be caused by irregular intake of anti-diabetic medication dosages or consuming snacks containing carbohydrates during bedtime.

Studies have shown that people without diabetes have reported steady blood glucose and plasma insulin levels, with a small increase in insulin secretion before dawn. Insulin secreted helps depress glucose production by the liver, thus preventing high glucose levels in the blood. However, in patients with diabetes, there is a dysregulated hepatic glucose production that arises due to the inability to produce compensatory insulin. This effect results in increased blood sugar levels during the morning in patients with type 2 diabetes.

When blood glucose levels rise to even inside the high-normal range (between 90-100ng/mL), there’s a higher risk of the degenerative process called glycation.

What is Glycation? It occurs when excess sugar molecules in the bloodstream clump with proteins in the blood. This effect causes a biochemical chain reaction that significantly increases oxidation, plaque formation, and a host of other degenerative processes in the body.

Advanced glycation end-products (AGEs ) are poisonous compounds found at the roots of nearly every degenerative health issue within the body. Harmful AGEs are among the significant reasons why early blood glucose regulation is so important.

The dawn phenomenon has been associated with a 30-70 percent increase in hemoglobin A1C (HbA1c)–that is a regular blood test that determines the 3-month blood glucose average–but more exactly, it’s a measure of the real glycation of the red blood cells. The healthy percentage of glycation or HbA1c is under 5%. Unhealthy is over 6 percent.

Among the best strategies to support nutritious A1C levels would be to address surging morning glucose levels.

How does it feel with the Dawn phenomenon?

Dawn phenomenon will make you feel the effects of having high sugar levels in the blood. This include:

Measuring blood glucose levels at various points of the day, such as during pre-breakfast, pre-lunch, and pre-dinner time can help you keep track and understand the dawn phenomenon better.

Your health expert may recommend several options to help you prevent or correct hyperglycemia due to the dawn phenomenon in the early morning:

– Dietary changes – Making necessary changes to your diet can help control high blood sugar levels in the blood and keeps a regular check on glucose levels. That makes the dawn phenomenon less likely to occur. The minimum effect of hypoglycemia by controlling the insulin levels is the first step to prevent the dawn phenomenon.

– Cut down carbs during bedtime – Avoiding snacks that contain carbohydrates during dinner time and especially during bedtime, can decrease the effects of the dawn phenomenon.

– Take your medicines on time – Taking your medications regularly on time helps keep your insulin levels and glucose levels normal. It also limits the fluctuations in blood glucose levels at dawn. There may be a need to use insulin pumps or using specific medication that targets an increase in blood sugar.

Managing the dawn phenomenon should be part of every diabetic patient’s controlling strategy. The condition could turn fatal for many if they don’t adhere to regimes that control your blood sugar. Exercise, diets and other lifestyle modifications are a major part of treating the dawn phenomenon, and diabetes in general.

– Finish your dinner before 6 pm. Prevent any sugars, carbs, or sweeteners with dinner or after dinner. Try a high-protein, high-fat snack before bed. Avoid processed and packaged foods as best possible. Some examples include oats, green bananas, chilled rice or potatoes, seeds, and some whole grains. For many, these dietary strategies can fix your dawn phenomenon concern.

After around 3 am, the body begins secreting wake-up hormones like the cortisol stress hormone, glucagon, and growth hormone. All of these hormones increase glucose levels. The liver begins releasing sugar into the blood out of its sugar or glycogen stores via gluconeogenesis. In a healthy system, the hormone release, liver gluconeogenesis, and insulin secretion are tightly regulated in an effort to control blood glucose.

After the body’s blood glucose regulation is altered because of circadian stress or liver blockage from processed foods and pesticides which alter intestinal microbiology, digestive power breaks down, leading to the liver over-secreting morning glucose and high levels of cortisol, growth hormone, and glucagon. Diving deeper into the origin of the dawn phenomenon, slowing down the liver’s glucose production through gluconeogenesis is a good beginning. There are several herbs that block gluconeogenesis. To effectively split the dawn phenomenon cycle, we will need to both equilibrium gluconeogenesis and deal with the hormonal increase of cortisol, glucagon, and growth hormone.

– Apple Cider Vinegar to lower blood sugar: In a research study, participants with blood sugar concerns who drank apple cider vinegar (ACV) in water with saccharin with every meal had 34% lower after-meal sugar than research participants that didn’t ingest ACV. The researchers think that the acetic acid (vinegar) in ACV slows the absorption of carbohydrates into the blood while increasing the body’s sensitivity into the bloodstream sugar-lowering impact of insulin. In another analysis, ACV significantly lowered morning blood glucose levels, suggesting a slowing down of the liver’s early morning sugar production and balancing of gluconeogenesis. This study also indicates that ACV supports insulin production and the body’s immunity to the effects of insulin.

– Tackling Glucagon Hormone: Glucagon is the sister hormone of insulin. Both are created by the pancreas, insulin from the beta cells, and glucagon in the alpha cells. Insulin’s job is to escort glucose in the blood into the cells, thus lowering blood glucose. Glucagon’s job is to increase blood glucose when it drops too low. Both insulin and glucagon are closely regulated to maintain healthy glucose levels. Historically, the holy grail supporting healthy blood sugar was just focused on insulin, with little if any attention on glucagon. According to a new study, glucagon can play a more important role in healthy blood glucose regulation than previously believed.

– Stevia to lower Glucagon levels: Stevia (Stevia rebaudiana or candy leaf), a frequent sugar alternative, has been heralded as a natural support for healthy glucose levels. The stevioside in stevia are strong antioxidants while both fostering insulin production and lowering glucagon levels. Stevia supports the body’s nutrient-sensing capability to deliver more precise feedback to the alpha (glucagon-producing) and beta (insulin-producing) pancreatic cells.

The dawn phenomenon may sometimes result in too high blood sugar levels in the blood. This rise can lead to complications that can range from mild to a life-threatening medical emergency. Some of these complications include

– Damage to the organ